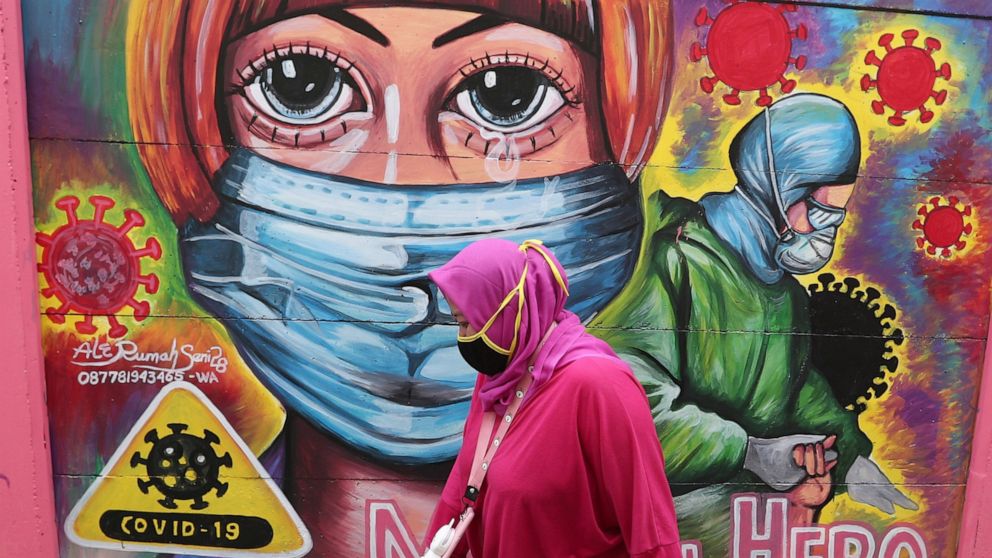 RALEIGH, N.C. — An increasing number of COVID-19 vaccination sites around the U.S. are canceling appointments because of vaccine shortages.

States are expected to find out their latest weekly allocation of vaccines on Tuesday. The White House plans to hold a call with governors to discuss the vaccine supply.

Governors and top health officials have been concerned about inadequate supplies and the need for more reliable estimates of how much is on the way so that they can plan accordingly.

On Tuesday, the CDC reported just over half of the 41 million doses distributed to states have been put in people’s arms. Some vaccination sites have canceled appointments for first-dose shots. Many are likely holding large quantities of vaccine in reserve to make sure people who have already gotten their first shot receive the required second shot on schedule, three to four weeks later.

The Department of Health Service report the state’s pandemic totals at 732,643 confirmed cases and 12,448 deaths.

The department announced the state’s first case on Jan. 26, 2020, saying the infected person was a Maricopa County resident who had recently returned from travel to Wuhan, China, a city that was at the epicenter of the outbreak.

On Tuesday, Arizona had the second-worst coronavirus diagnosis rate, with one person infected out of every 145 residents in the past week.

SAN DIEGO — Several gorillas at the San Diego Zoo Safari Park appear to be recovering weeks after testing positive for the coronavirus, including a silverback who received antibody treatment.

The park’s executive director Lisa Peterson says the eight western lowland gorillas are eating, drinking and active after being exposed by a zookeeper who tested positive for coronavirus in early January.

Peterson says fecal samples from the gorillas are no longer testing positive for the virus. She says some of the gorillas will get the COVID-19 vaccine from a supply made specifically for animals.

BRATISLAVA, Slovakia — Slovakia has tested nearly half of its population in a nine-day nationwide testing effort.

Prime Minister Igor Matovic says a total of 2.59 million Slovaks have been tested in the nation of 5.4 million. The testing started Jan, 18 and ended on Tuesday.

Matovic says 30,556 people tested positive by rapid antigen tests or 1.18%. He says the testing will be repeated in half of the country’s 72 counties with the worst results.

Slovakia has vaccinated 102,692 people with the Pfizer shots. The country has reported 238,617 confirmed coronavirus cases and 4,260 deaths.

The latest study looks at schools in rural Wisconsin and found cases linked to in-school transmission were very low even while infections were common in the same communities.

Margaret Honein of the Centers for Disease Control and Prevention says,

“Data has really accumulated over the last few months that with good prevention efforts … we can keep transmission in schools quite low.”

The Wisconsin study was published online Tuesday by a CDC journal, Morbidity and Mortality Weekly Report. It focused on 17 schools in Wood County in central Wisconsin and found cases were diagnosed at rate 37% lower than reported in the county overall.

In the Journal of the American Medical Association, Honein and other CDC scientists say it’s re-assuring that the kind of spread seen in nursing homes and other places hasn’t been noted in schools with prevention measures.

However, they say some extracurricular school-related activities, such as sports, have triggered coronavirus spread in some places.

He says that’s enough to take care of the people whose appointments at city-run sites last week were bumped to this week. Chokshi says city officials will find out soon about the city’s allocation for next week.

Mayor Bill de Blasio says the city had just 7,700 first doses on hand. He says he’d like to use designated second doses for first shots to “put those second doses into play.”

ATLANTA — A member of the Georgia state House has been removed from the chamber for not abiding by the legislature’s coronavirus testing policy.

Rep. David Clark, a Republican from Buford, was asked to leave the House floor Tuesday morning. Clark refused to leave on his own and had to be escorted out by police.

Members of the legislature undergo testing twice weekly on Mondays and Thursdays. Clark told reporters he is abstaining from twice-a-week testing until it is available to everyone in Georgia, particularly teachers and first responders.

A spokesman for House Speaker David Ralston issued a statement that didn’t name Clark. It said he had been “advised numerous times about the requirements and had refused to be tested at any point during this session.”

LONDON — More than 100,000 people have died in the United Kingdom after contracting the coronavirus.

The health department said 100,162 people have died after testing positive, including 1,631 new deaths reported Tuesday. Britain is the fifth country in the world to pass that mark, after the United States, Brazil, India and Mexico, and by far the smallest.

The U.S. has recorded more than 400,000 COVID-19 deaths, the world’s highest total, but its population of about 330 million is about five times Britain’s. The U.K. toll is 30,000 more than the total number of British civilians killed during the six years of World War II.

Health authorities on Tuesday attributed 291 deaths to the coronavirus in the previous 24 hours, as total deaths surpassed 11,000. Coronavirus patients in hospitals, many of which are close to full, rose to a record 6,472.

Experts warn the peak of the surge may come only in mid-February.

GENEVA — Experts at the World Health Organization have announced plans for a Feb. 8 meeting to review AstraZeneca’s coronavirus vaccine, saying the timing could coincide with an emergency-use approval for it by the U.N. health agency.

Dr. Joachim Hombach, the executive secretary of the WHO’s Strategic Advisory Group of Experts on immunization, says it “tentatively” plans for the review which “would then be pretty much timed with the emergency listing process of WHO.”

That vaccine holds promise because it is cheaper than other vaccines currently being deployed, and it would not require conservation at ultra-low temperatures that some others do — making it a more likely candidate for rollout in remote places and developing countries.

PARIS — Teachers and university students marched or went on strike Tuesday around France to demand more government support amid the pandemic.

Teachers want better virus protections at their schools, which have remained open since September because of the government’s concern about learning gaps. University students are frustrated that they’ve been barred from campuses since October. The protests were held in Paris, Marseille and other cities.

The education ministry says about 12% of teachers nationwide took part in a national call to strike Tuesday.

Slow deliveries from two companies hampered its vaccine rollout in several nations. The bloc criticized pharmaceutical company AstraZeneca, accusing it of failing to guarantee delivery of coronavirus vaccines without valid explanation. It’s facing delivery delays from Pfizer due to a plant upgrade in Belgium.

The EU has committed to buying 300 million AstraZeneca doses with option on 100 million extra shots. Late last week, the company said it was planning to reduce a first contingent of 80 million to 31 million.

The European Medicines Agency is scheduled to review the AstraZeneca vaccine Friday ahead of its expected approval. The EU has signed six vaccine contracts for more than 2 billion doses, but so far only the Pfizer and Moderna vaccines have been approved for use.

WUHAN, China — A relative of a coronavirus victim in China is demanding to meet a visiting World Health Organization expert team, saying it should speak with affected families who allege they are being muffled by the Chinese government.

Zhang Hai’s father died of COVID-19 in February 2020. He has been organizing relatives of victims to demand accountability from officials. Zhang says he’s worried the WHO might be used to provide cover for alleged Chinese missteps in the early days of the outbreak.

WHO says the visit is a scientific mission to investigate the origins of the virus, not an effort to assign blame. The WHO team is expected to begin field work later this week.

On Monday, Dr. Anthony Fauci, the top infectious disease official in the U.S., told the World Economic Forum that the origins of the virus are still unknown, “a big black box, which is awful.”

Keiji Fukuda, a public health expert at the University of Hong Kong and a former WHO official says, “it all comes down to what will the team have access to. Will they really be able to ask the questions that they want to ask?”

PARIS — France abandoned plans to space out coronavirus vaccinations by six weeks instead of three.

Health Minister Olivier Veran announced maintaining the time between two injections of the Pfizer vaccine at 21 to 28 days, which is in line with WHO recommendations.

Alain Fisher, president of the scientific committee advising the government on vaccines, says the effects of a longer gap between injections remain unclear and the first shot only provides limited immunity.

He says spacing out injections could be risky at a time when France faces growing COVID-19 hospitalizations and fast-spreading new virus variants.

In early January, French Prime Minister Jean Castex had announced extending the time between shots to six weeks to allow more people to get the initial shot.

Holmes Trujillo became defense minister in November 2019, after serving as foreign minister. He was also the mayor of Cali from 1988-1990.

Colombia reported more than 15,000 new cases per day in mid-January, up from about 7,000 cases in early December.

Colombia has more than 50,000 confirmed deaths from the coronavirus.

JAKARTA, Indonesia — Indonesia’s confirmed coronavirus infections since the pandemic began crossed 1 million on Tuesday, and hospitals in some hard-hit areas were near capacity.

Indonesia’s Health Ministry announced new daily infections rose by 13,094, bring the country’s total to 1,012,350, the most in Southeast Asia. The total number of deaths reached 28,468. Jakarta continues to be hardest-hit city in Indonesia.

The milestone comes just weeks after Indonesian launched a massive campaign to inoculate two-thirds of the country’s 270 million people, with President Joko Widodo receiving the first shot of a Chinese-made vaccine. Health care workers, military, police, teachers and other at-risk populations are being prioritized for the vaccine in the world’s fourth most populous country.

Officials say Indonesia will require almost 427 million doses, due to an estimate that 15% of doses may be wasted during the distribution process in the vast nation of more than 17,000 islands, where transportation and infrastructure are limited in places.

Why Plantar Fasciitis is More Common Than You Think

Adelaide arm-wrestle is just what the Dockers orderedFyfe’s Dockers notched their third win of...