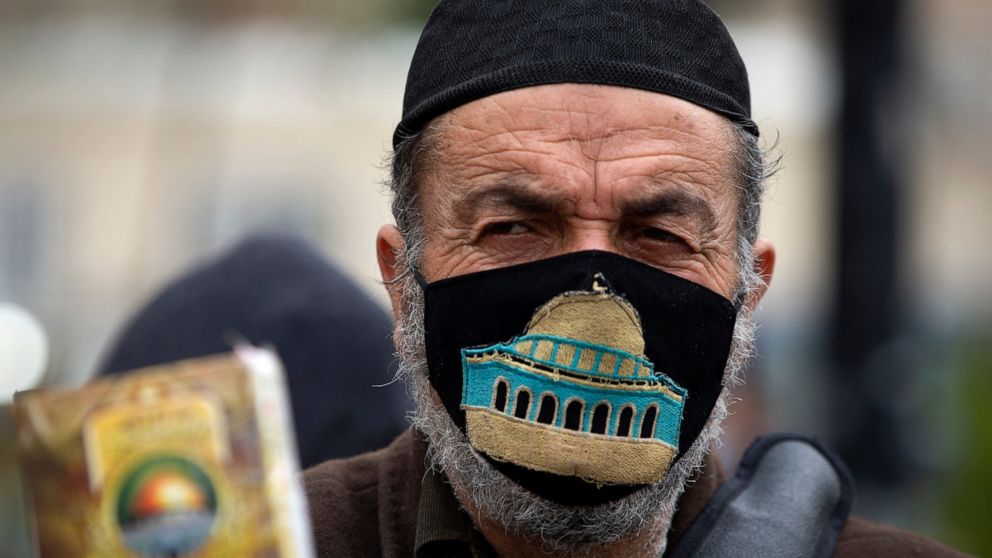 Data released by the city’s health department shows that 48% of the city residents who have gotten at least one vaccine dose are white. That’s far higher than the roughly one-third the city’s population that is non-Hispanic white.

Just 11% of vaccine doses administered to New York City residents went to Black people and 15% to Latinos. The vaccine numbers are incomplete because about 40% of people who have been vaccinated in the city haven’t provided demographic information.

Still, the figures mirror vaccination data from other cities and states.

“Clearly, we do see a profound disparity that needs to be addressed aggressively and creatively,” de Blasio said in a conference call with reporters. “We’ve got a profound problem of distrust and hesitancy, particularly in communities of color.”

— Even if schools reopen by late April, millions of students, many of them minorities in urban areas, may be left out.

— The U.S. is backing off for now on a plan to offer COVID-19 vaccinations to the 40 prisoners held at the detention center at Guantanamo Bay, Cuba.

The businesses can reopen, following a 25% capacity limit, given the improvement in the number of COVID-19 cases and in the city’s positivity rate.

Other sites include aquariums, indoor recreational venues with the potential for low contact, such as batting cages and bowling alleys, and gaming arcades.

“While there has been some improvement in recent weeks, it’s still vital that everyone remains vigilant,” Mayor Marty Walsh said in a statement last week.

LIMA, Peru — Peru began what was supposed to be a severe lockdown Sunday to combat surging COVID-19, but the order was widely ignored in the nation’s capital.

President Francisco Sagasti went on television urging Peruvians “to make an extra effort to contain the growing wave of infections and deaths.” His government told people in the capital and nine other regions to limit trips outside the home to 60 minutes and it closed churches, gymnasiums, museums, libraries and other institutions.

But marketplaces were crowded. Even some bus drivers ignored mandatory face mask rules. Seventy percent of Peruvians have no income if they stay home. The government says it will give $165 each to 4 million families — but only after the two-week quarantine.

Hundreds of people crowded bus stations in Lima to head for less-restricted rural regions before terminals close later this week. Flights from Brazil and Europe have been cancelled.

Lima Police Chief Jorge Angulo said his agency would try to enforce restrictions, and he noted that 540 of his officers already have died of the virus.

The country of 33 million people has recorded more than 1 million infections and more than 40,000 deaths from COVID-19.

THE HAGUE, Netherlands — Dutch elementary schools and childcare centers will reopen from a weeks-long coronavirus lockdown on Feb. 8.

The government announced the move Sunday following guidance from a team of experts that advises on policies to tackle the pandemic that has killed just over 14,000 in the Netherlands.

Education Minister Arie Slob says, “it’s a relief that the schools can open again. For parents and teachers but, of course, especially for the students.”

The Netherlands, which has been in a tough lockdown since mid-December and under a 9 p.m. to 4:30 a.m. curfew for just over a week, has seen rates of infections fall slowly in recent weeks, but the government remains concerned that new, more transmissible variants are gaining ground and will lead to a new rise in infections.

The education ministry says that when classrooms open again, any child with symptoms of COVID-19 will have to stay home, and if a student tests positive the whole class will have to go into isolation.

No date has been set for a reopening of high schools.

ATHENS, Greece — Greek authorities have confirmed the first detection of the South African variant of the new coronavirus in the country, prompting top health officials to fly to the area where it was found for meetings on Sunday.

The minister leading the government response to the pandemic and the head of the country’s public health body met with doctors and the local bishop in the northern city of Thessaloniki. The variant is believed to be more contagious than the original type and it was detected in a 36-year-old deacon in a suburb of the city.

“We will be doing screenings to isolate the persons who have been in contact with the patient,” said Panayiotis Arkoumaneas, head of the National Public Health Organization.

There have also been 173 cases of people affected with a variant first detected in the U.K., authorities said Sunday.

Authorities announced 484 new cases of coronavirus on Saturday, as well as 17 deaths. The total number of confirmed cases since the start of the pandemic is 156,957, with 5,796 fatalities.

Experts warn there could be a resurgence in February and March and say the situation will remain volatile until a large number of vulnerable people are vaccinated.

“The virus is playing the drums and we are dancing to its beat,” said Nikos Sipsas, member of the state advisory committee on the pandemic.

ROME — For the first time in weeks, the number of daily new admissions of COVID-19 patients to intensive care wards in Italy has dipped below 100, according to the Health Ministry’s figures on Sunday.

The total number of COVID-19 ill in ICU beds nationwide stood at 2,215. While that number is far lower than the nearly 4,000 patients receiving intensive care in any day in late November, Italy has been struggling with a surge of coronavirus infections since autumn.

With 88,516 known dead, Italy has Europe’s second-highest known toll, after Britain’s. Italy, a nation of 60 million, has registered more than 2.5 million confirmed infections in the pandemic.

Brussels police on Twitter repeatedly called on people not to gather and later dispersed the demonstration, which ended peacefully.

Authorities had warned that riots in the Netherlands over coronavirus restrictions could spark similar protests in neighboring Belgium.

Belgium’s tough lockdown includes a 9 p.m. curfew and a ban on nonessential travel in and out of the country, which has had one of Europe’s worst outbreaks.

Authorities have reported over 21,000 confirmed virus deaths in a nation of 11 million.

HARTFORD, Conn. — A top Connecticut official says that COVID-19 vaccines have been administered to enough nursing home residents in the state to potentially stop the transmission of the virus among those residents.

Josh Geballe, chief operating officer for the state, said Saturday that Connecticut nursing homes are reporting that 90% to 100% of residents have received at least the first of two vaccine shots.

He said the number of weekly COVID-19 cases in nursing homes has declined by 66% in the last three weeks. Geballe said some vaccine doses that had been earmarked for nursing homes are being reallocated to hospitals and retail sites.

The figures came as Portugal and Spain began applying border restrictions for a period of two weeks. Portugal is in lockdown and has banned all nonessential travel abroad for its citizens.

The country has had the world’s worst rate of new daily cases and deaths per 100,000 population for more than a week, according to a tally by Johns Hopkins University.

Portuguese health authorities say total fatalities are now at 12,482 and the total number of cases has surpassed 720,500.

Virus patients in hospitals, many of which are close to full, are at 6,694.

Experts say the peak of the latest surge in Portugal may not come until mid-February, as a fast-spreading variant first identified in Britain takes hold.

BEIJING — China recorded more than 2,000 new domestic cases of COVID-19 in January, the highest monthly total since the tail end of the initial outbreak in Wuhan in March of last year.

The National Health Commission said Sunday that 2,016 cases were reported from Jan. 1-30. That does not include another 435 infected people who arrived from abroad. The tally for Jan. 31 is due to be released Monday.

Two people have died in January, the first reported COVID deaths in China in several months.

Most of the new cases have been in three northern provinces. Hardest-hit Hebei province, which borders Beijing, has reported more than 900 cases. Beijing, the Chinese capital, has itself had 45 cases this month.

The numbers, while low compared to many other countries, have prompted officials to tighten restrictions and strongly discourage people from traveling during the Lunar New Year, a major holiday when people typically return home for family reunions.

BERLIN — Austria and Germany say they will provide medical assistance to Portugal as the country struggles with a surge in coronavirus cases.

Kurz said in a tweet that “swift, unbureaucratic help” was required to save lives, adding that Austria has previously taken in patients from France, Italy and Montenegro.

Meanwhile, the German military plans to send medical aid and doctors to Portugal in the coming days.

Defense Ministry spokesman Christoph Czwielung said the military “will provide personnel and material support” though details on the extent and timing were still being finalized.

The 50,000-dose shipment arrived at Cairo international airport on a flight from Dubai, said the officials, who spoke on condition of anonymity because they were not authorized to brief the media.

It was the second shipment of coronavirus vaccines received by Egypt. The first was 50,000-doses of the Chinese-made Sinopharm vaccine that was delivered last month.

Egypt, a county of more than 100 million people, has reported more than 165,400 confirmed cases, including 9,263 deaths. However, the actual numbers of COVID-19 cases, like elsewhere in the world, are thought to be far higher, in part due to limited testing.

Vice Health Minister Kang Do-tae on Sunday pleaded with people to stay home during the holidays as he extended a clampdown on private social gatherings of five or more people through the end of the holiday on Feb. 14.

The government will also maintain restrictions on indoor dining in the Seoul metropolitan area for another two weeks, requiring restaurants to provide only deliveries and takeout after 9 p.m.

Kang said officials are also concerned about how the toughened social distancing rules are hurting business owners and they could possibly decide to ease some restrictions after monitoring the spread of the virus for another week.

South Korea reported another new 355 cases on Sunday, bringing the national caseload since the pandemic began to 78,205, including 1,420 deaths.

ISLAMABAD — Pakistan’s planning minister says the country will receive 17 million doses of the AstraZeneca vaccine under the WHO’s COVAX Facility, out of which up to 7 million would arrive by March.

Asad Umar in his Saturday night tweet said also a plane is being sent to China to bring the first tranche of half a million doses of Sinopharm’s vaccine — enough to inoculate 250,000 out of 400,000 health workers.

He said the rest of the AstraZeneca vaccine would be delivered in the second half of the year.

The Latest: Half eligible Californians have at least 1 shot

Latrell incident ‘made me sick to my stomach’ South Sydney’s Latrell Mitchell is binned...