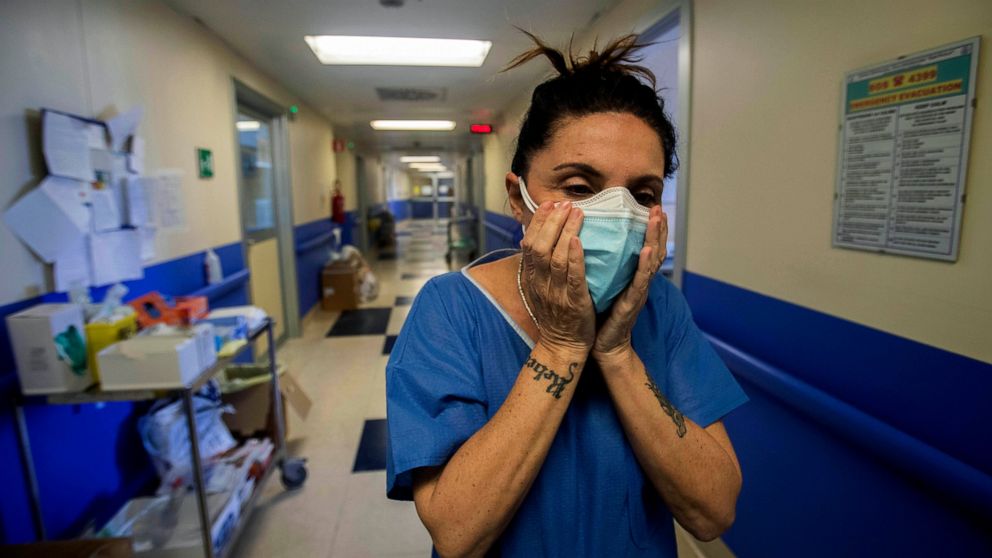 BERLIN — Senior German officials are calling for tough new measures to curb the spread of coronavirus and record high cases.

The country’s disease control agency, the Robert Koch Institute, reported 28,438 confirmed cases in the past 24 hours and 496 deaths.

Germany, which had a much lower death rate than some of its large European neighbors in the spring, now has 1.3 million confirmed cases and 21,466 confirmed deaths since the start of the outbreak.

Finance Minister Olaf Scholz called for the swift closure of most stores and pledged financial support for affected businesses.

The governor of the southwestern state of Baden-Wuerttemberg, Winfried Kretschmann, says he expects a “hard lockdown” before Christmas.

Chancellor Angela Merkel is scheduled to meet the governors of Germany’s 16 states on Sunday to discuss the next steps in containing the pandemic.

— Some Americans have the coronavirus after celebrating Thanksgiving with people outside their households. Health officials are warning people not to make the same mistake during this month’s celebrations.

TOKYO — Tokyo reported 621 new coronavirus cases Saturday, setting a new record in the capital where a lack of government measures triggered concerns about a surge during the holiday season.

Nationwide, Japan reported a total of 174,000 cases, with about 2,500 deaths since the pandemic began.

Experts on a Tokyo metropolitan task force say serious cases are on the rise, putting burdens on hospitals and forcing many of them to scale back on care for other patients.

Japan issued a non-binding state of emergency in the spring and has survived earlier infection peaks without a lockdown.

The coronavirus task force on Friday asked the national government to take tougher steps to slow social and economic activities, such as suspension of out-of-town trips and requesting shorter business hours in areas where infections are accelerating.

Latest data shows ongoing measures have been ineffective and the situation could worsen during the holiday season.

WELLINGTON, New Zealand — New Zealand and the Cook Islands say they plan to have a travel bubble in place early next year, which will allow people to fly between the two countries without going into quarantine.

The arrangement would represent the first travel bubble that New Zealand has agreed to since closing its borders when the coronavirus first hit earlier this year.

New Zealand has moved cautiously on restarting international travel after stamping out community spread of the virus. Australia is currently allowing many New Zealanders to arrive without going into quarantine but that arrangement isn’t yet reciprocal.

The Cook Islands, with a population of only about 10,000, is self-governing but has close ties to New Zealand under a free-association arrangement, and its economy relies on New Zealand tourists.

SEOUL, South Korea — South Korea has reported another 950 coronavirus cases, its largest daily increase since the emergence of the pandemic, as fears grow about overwhelmed hospitals in the greater capital area.

The figures released by the Korea Disease Control and Prevention Agency on Saturday brought the country’s caseload to 41,736, after health officials added more than 8,900 cases in the last 15 days alone. Six COVID-19 patients died in the past 24 hours to bring the death toll to 578.

Most of the new cases came from the densely populated Seoul metropolitan area, where health workers have struggled to track transmissions that occur at hospitals, long-term care facilities, restaurants, saunas, schools and army units.

Infections were reported in other major urban centers, including Busan, Gwangju, Daejeon, Ulsan and Daegu, a southeastern city that was the epicenter of the spring outbreak.

The government had eased its social distancing restrictions to the lowest tier in October despite experts warning about a viral surge during colder weather, when people spend longer hours indoors.

Officials restored some restrictions in recent weeks, such as shutting nightclubs and allowing restaurants to provide only deliveries and takeout after 9 p.m., and could be forced to clamp down on economic activity further.

Prime Minister Chung Sye-kyun says South Korea may have to elevate social distancing restrictions to the highest level, which includes a ban on gatherings of more than 10 people, school closures, a halt to to professional sports and requiring companies to have most of their employees work from home.

President Moon Jae-in in a Facebook message apologized for his government’s failure to contain the outbreak despite months of measures that hurt the economy. He pleaded for vigilance, saying the country was going through its “last crisis before the arrival of vaccines and treatment.”

Officials say those who tested positive attended the event Nov. 7 to 8 at Courtside Basketball Center in Rocklin. They included 39 middle- and high school players, three coaches and 35 additional contacts.

An additional 17 cases outside Santa Clara County have been traced to the tournament.

The California Department of Public Health has initiated an enforcement investigation involving the tournament operator.

The number released Friday is among the highest daily death tolls for the state in recent weeks.

Gov. Michelle Lujan Grisham says her prayers are with those who have lost loved ones and she urged people to abide by the state’s public health restrictions.

New Mexico is preparing next week to receive its first round of vaccine doses. Officials say they will be delivered to frontline health care workers.

WASHINGTON — The U.S. has given the final go-ahead to the nation’s first COVID-19 vaccine, marking what could be the beginning of the end of an outbreak that has killed nearly 300,000 Americans.

Shots for health workers and nursing home residents are expected to begin in the coming days after the Food and Drug Administration on Friday authorized an emergency rollout of what promises to be a strongly protective vaccine from Pfizer and its German partner BioNTech.

Initial doses are scarce and rationed as the U.S. joins Britain and several other countries in scrambling to vaccinate as many people as possible ahead of winter. It will take months of work to tamp down the coronavirus that has surged to catastrophic levels in recent weeks and claimed 1.5 million lives globally.

His proposal outlined Friday includes about $5,000 in direct payments to residents from the state’s oil-wealth fund and an infrastructure plan he said is intended to create jobs. He says Alaskans and businesses are suffering, and now is the time to act.

The state’s economy has been battered by the coronavirus pandemic, with tourism and hospitality industries hit hard. North Slope oil prices have been below $50 a barrel for much of the year.

SANTA ANA, Calif. — A California judge has ordered a 50% reduction in the populations at Orange County jails to protect incarcerated people from a major coronavirus outbreak.

Superior Court Judge Peter Wilson’s decision comes in response to a lawsuit by the American Civil Liberties Union that said conditions at the jails violate the state’s constitution and disability discrimination law.

The county has been ordered to file a plan with the court no later than Dec. 31.

Orange County Sheriff Don Barnes says his department is “evaluating the order, its impacts and our options for appeal.”

MEXICO CITY — Mexico’s medical safety commission has approved the emergency use of the Pfizer-BioNTech vaccine for the coronavirus.

Assistant Health Secretary Hugo López-Gatell said Friday that Mexico is the fourth country to do so, behind Britain, Canada and Bahrain.

López-Gatel has said that front-line health workers will get the shots first. Vaccinations are expected to begin as soon as next week.

López-Gatel says the approval “is of course a reason for hope,” though the initial rounds of shots are not nearly enough for Mexico’s health-care workforce.

The department’s Civil Rights Division filed an argument in favor of three Roman Catholic high schools and the Michigan Association of Non-Public Schools. A federal judge in Kalamazoo will hear arguments Monday.

The filing says schools and families have a constitutional right to practice their religion through in-person instruction. It cites a recent U.S. Supreme Court order that barred New York from enforcing certain restrictions on religious services in areas hit hard by the coronavirus.

Michigan’s health department argues the teaching restriction is necessary to control the spread of the coronavirus, especially after Thanksgiving gatherings.comment.

Djoker blindsided in wild start to Open final Novak Djokovic is on the verge...

Spring cleaning for health: Easy ways to re-energise your diet and health