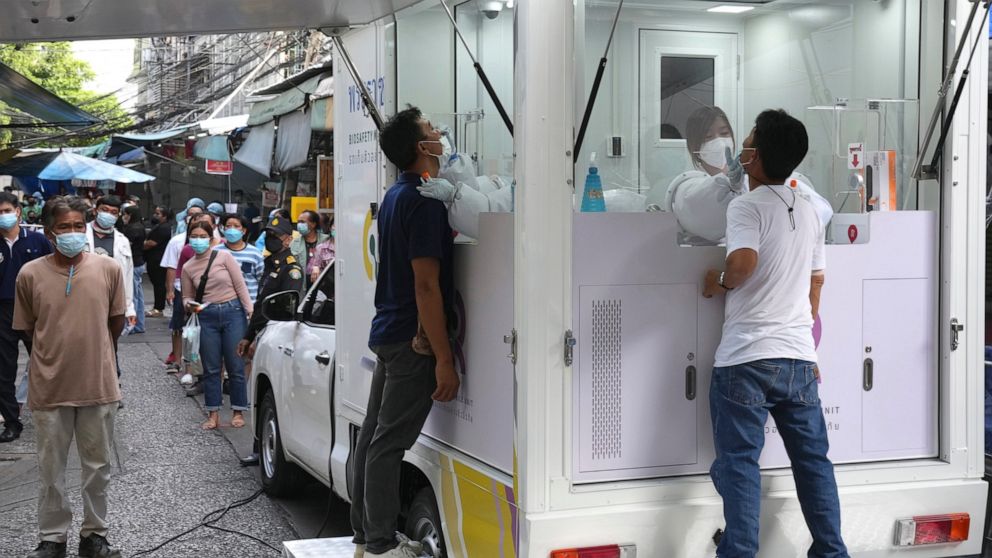 MOSCOW — Confirmed coronavirus cases are continuing to rise in Russia, where authorities on Friday reported 12,505 new infections — a 25% increase from the number registered on Monday.

Moscow accounted for nearly half of the newly confirmed cases with 5,853, almost twice the number reported in Russia’s capital at the beginning of the week Despite the surge of infections, Moscow Mayor Sergei Sobyanin vowed earlier this week not to impose a lockdown.

In St. Petersburg, Russia’s second-largest city, hours-long lines of ambulances have been spotted this week near hospitals treating COVID-19 patients. The city hosted a massive economic forum last week and is scheduled to host several matches of soccer’s European Championship next week.

The Russian state coronavirus task force has reported a total of nearly 5.2 million virus cases and over 125,000 deaths in the pandemic. Most virus-related restrictions in Russia were lifted last summer, and authorities have shunned tough measures ever since.

CARBIS BAY, England — Leaders from the Group of Seven industrialized nations are set to commit at their summit to sharing at least 1 billion coronavirus shots with struggling countries around the world — half the doses coming from the U.S. and 100 million from the U.K.

Vaccine sharing commitments from U.S. President Joe Biden and British Prime Minister Boris Johnson set the stage for the G-7 meeting in southwest England, where leaders will pivot Friday from opening greetings and a “family photo” directly into a session on “Building Back Better From COVID-19.”

“We’re going to help lead the world out of this pandemic working alongside our global partners,” Biden said. The G-7 also includes Canada, France, Germany, Italy and Japan.

The leaders hope the meeting in the resort of Carbis Bay will also energize the global economy. On Friday, they are set to formally embrace a global minimum tax of at least 15% on corporations, following an agreement reached a week ago by their finance ministers. The minimum is meant to stop companies from using tax havens and other tools to avoid taxes.

It represents a potential win for the Biden administration, which has proposed a global minimum tax as a way to pay for infrastructure projects, in addition to creating an alternative that could remove some European countries’ digital services taxes that largely hit U.S. tech firms.

COPENHAGEN, Denmark — Norway’s King Harald V says he believes the coronavirus pandemic “is nearing its end” and people “should rejoice.”

During the pandemic, several members of the Norwegian royal family were protectively put in quarantine and either canceled official duties or performed them digitally.

Harald formally heads the Council of State with the government and during its meetings he is briefed about current affairs and signs laws. In March, he took part in such a meeting by telephone.

The Norwegian monarch, whose duties are largely ceremonial, said Thursday the pandemic has meant that he and his wife, Queen Sonja, are “seeing far less of you than we normally do.”

Norway has had one of Europe’s lowest infection rates throughout the pandemic, chiefly because of the Scandinavian country’s low population density. The Norwegian public’s overall trust in government authorities also has been credited with keeping virus cases down.

CHICAGO — Illinois is lifting all capacity limits on bars, restaurants, businesses and other venues as of Friday, nearly 15 months after the state’s first stay-at-home order of the coronavirus pandemic.

Businesses still can have their own rules for capacity, masks and social distancing. Masks are still required on public transportation and in airports, schools and hospitals.

More than 68% of Illinois residents who are 18 or older have received at least one dose of vaccine, and 51% of adults are fully vaccinated, the state health department said, citing federal data.

The health department said 209 people with COVID-19 were in intensive care units statewide Thursday and 103 were on ventilators — “some of the lowest counts we’ve seen since the pandemic began.”

MANILA, Philippines — Philippine officials have allowed the reopening of gyms, skating rinks, racket courts and museums in metropolitan Manila and adjacent provinces as a coronavirus surge continues to ease.

Trade Secretary Ramon Lopez says Filipinos 65 years old and above who have been restricted to home can now travel within the densely populated capital region two weeks after having been fully vaccinated.

He says gyms and similar indoor businesses with safety certificates can reopen up to 30% of their capacity.

Lopez has called for the further reopening of the battered economy to address unemployment and hunger. Museums and historical sites also can reopen at 20% capacity but guided tours remain prohibited.

The Philippines has reported the second highest number of COVID-19 infections in Southeast Asia at nearly 1.3 million with 22,312 dead. The government reimposed a lockdown in the capital region and four nearby provinces after infections surged in March.

NEW DELHI — The Indian state of Bihar has increased its COVID-19 death toll after the discovery of thousands of unreported cases, raising concerns that many more fatalities were not officially recorded.

Officials said the 3,951 unreported fatalities had occurred in May and reflect “deaths reported at private hospitals, in transit to health facilities, under home isolation and those dying of post COVID-19 complications.”

Overall, India’s cases and deaths have fallen steadily in the past weeks.

The 91,702 cases added in the past 24 hours pushed India’s total to more than 29.3 million on Friday, second only to the United States. The Health Ministry also reported 3,403 fatalities in the past 24 hours, raising the overall death toll to 363,079.

WASHINGTON — U.S. health officials are investigating what appear to be higher than expected reports of heart inflammation in male teens and young adults after they get a second dose of the Pfizer and Moderna vaccines.

It’s not clear if the inflammation is caused by the shots and the reports still are rare, the Centers for Disease Control and Prevention says. The CDC is urging everyone 12 and older in the United States to get vaccinated.

A CDC official said Thursday that as of May 31, the agency had 275 preliminary reports of such inflammation in 16- to 24-year-olds,.That’s out of more than 12 million second-dose injections of the vaccines.

The official says the cases seem to occur more often in men and in younger people, and most already have fully recovered.

BURLEY, Idaho — School district officials in Idaho have started offering a full summer school program to help students who may have fallen behind academically during the coronavirus pandemic catch up.

“The Cassia School District hasn’t offered open and full summer school programs for any student in more than 20 years and perhaps longer. Those around now can’t recall it outside very specific schools or student participation,” Critchfield said.

Raft River Elementary School Principal Melina Ficek, who is coordinating the full summer program for the district, said it was launched because students who recently returned to school were “further behind than before.”

Officials said 840 students signed up out of an average student population of 5,500 across the district.

White Pine Elementary School Principal Diana Gill said parents were thrilled when the decision was made to hold a summer program. About one in six students out of the school’s 600 students showed up for the first day of summer school Monday.

LOS ANGELES — Businesses in California remain baffled by the shifting rules over who needs to wear masks and where as the nation’s largest state fully reopens from the pandemic on Tuesday.

That has some business leaders clamoring for Newsom, who will likely face a recall election in the fall, to step in and order just one set of mask rules for California’s 40 million people.

With vaccinations rising and coronavirus cases low, California will end most mask rules on June 15 for people who are vaccinated while continuing to require face coverings for unvaccinated people in indoor public settings and businesses. Everyone will need to remain masked in some places such as public transit and indoor school classes.

DENVER—Colorado Gov. Jared Polis has announced the first five winners of $50,000 scholarships in a program designed to encourage students to get vaccinated against COVID-19.

The state is offering 25 student scholarships for students ages 12 to 17 who have received at least one vaccine dose.

Winners selected in random drawings can use the scholarships at the post-secondary educational institutions of their choice. That includes colleges and technical, occupational and credential programs inside and outside Colorado.

Five winners will be chosen each week through July 9. Colorado also is offering a $1 million lottery program for five adults who get at least one shot.

ATLANTA — Georgians receiving unemployment benefits will once again be required to look for work and will be able to earn less before unemployment payments drop beginning June 27.

Georgia announced last month that beginning June 27 it would cut off federal programs that provide a $300-a-week pandemic boost to people on the jobless rolls as well as programs that pay federal money to people not usually eligible for state unemployment.

Butler earlier signaled he would reinstate work-search requirements, a move underway in more than three-quarters of states.

WASHINGTON — Johnson & Johnson says U.S. health officials have extended the expiration date for millions of doses of its coronavirus vaccine by an extra six weeks.

The drug maker says the FDA approved a longer shelf-life for the one-dose shots. State officials recently warned that many unused doses would reach their original three-month expiration by the end of June.

The extension comes as the rate of new U.S. vaccinations continues to slip. The U.S. averaged about 800,000 injections per day last week. That’s down from a high of nearly 2 million per day two months ago.

President Joe Biden’s goal is 70% of American adults partially vaccinated by July 4. The CDC says about 64% of Americans 18 and above have received at least one dose.

Ranked: Popular sauces and their calorie, sugar and salt load