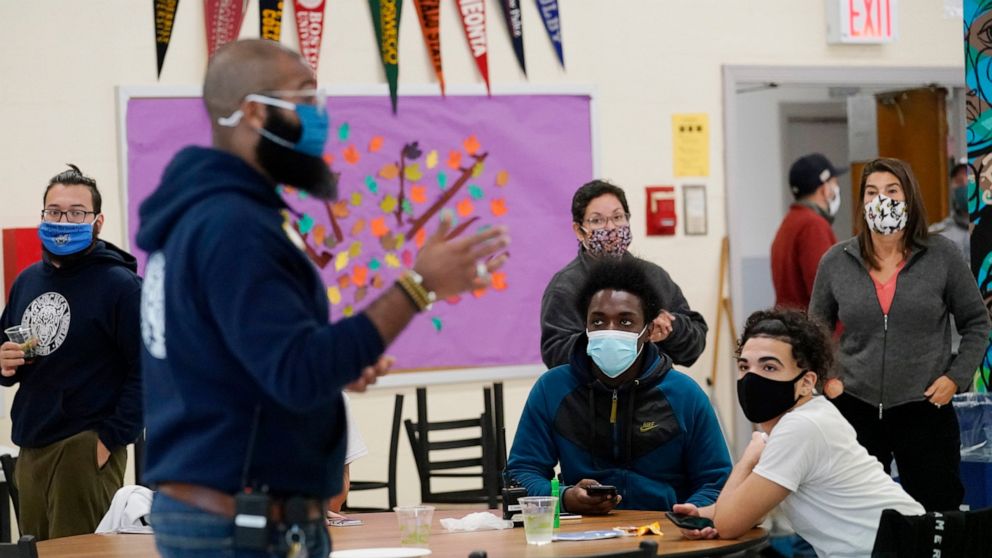 HANOI, Vietnam — WASHINGTON — President Joe Biden is celebrating the full FDA approval of Pfizer’s COVID-19 vaccine and is urging the unvaccinated to go get their inoculations.

Biden on Monday addressed those who were waiting on the full approval and declared “it is now happened, the moment you’ve been waiting for is here.”

He also used the moment to call on private companies to require their employees to get vaccinated. The president made clear: “it’s time to get your vaccination” and warned that the highly contagious delta variant of the coronavirus was causing COVID cases to rise nationwide.

The FDA had previously approved three vaccines — Pfizer, Moderna and Johnson & Johnson — under an emergency use authorization. Pfizer is the first to receive full FDA approval, which Biden dubbed the “gold standard.”

— Pandemic fiction: Fall books include stories of the virus

At least 70% of recent calls to the Mississippi Poison Control Center have been related to ingestion of livestock or animal formulations of ivermectin purchased at livestock supply centers, Mississippi Department of Health officials said.

No hospitalizations have been reported. Most callers — 85% — have had mild symptoms, according to the Department of Health. One individual was advised to see a physician because of the high dosage they reportedly took.

“Patients should be advised to not take any medications intended to treat animals and should be instructed to only take ivermectin as prescribed by their physician,” State Epidemiologist Dr. Paul Byers wrote in a memo Friday. “Animal drugs are highly concentrated for large animals and can be highly toxic in humans.”

There are U.S. Food and Drug Administration-approved uses for ivermectin in both people and animals. Ivermectin tablets are approved at very specific doses for some parasitic worms, and there are topical formulations for head lice and skin conditions.

Ivermectin is not a drug for treating viruses. The federal government has not approved ivermectin for use in treating or preventing COVID-19 in humans.

ATLANTA — Louisiana State University will require students on its campuses to be vaccinated now that the FDA has given full approval to the Pfizer vaccine, but details of the mandate were still coming, university officials said Monday.

The university has more than 30,000 students.

Louisiana has repeatedly broken records this month for the number of people hospitalized with COVID-19. Most of the hospitalizations involve people who are unvaccinated, according to the state health department.

Only about 39% of Louisiana’s residents are fully vaccinated, one of the nation’s lowest inoculation rates.

WASHINGTON — The Pentagon says it’s preparing to make the COVID-19 vaccine mandatory for the military.

Spokesman John Kirby said Monday that Pentagon officials are preparing to issue guidance to require vaccination now that the Pfizer vaccine has been given full approval. He did not give a timeline on when that guidance would be issued.

Earlier this month, Defense Secretary Lloyd Austin said in a memo that he would “seek the president’s approval to make the vaccines mandatory no later than mid-September, or immediately upon” licensure by the Food and Drug Administration — “whichever comes first.”

Austin said in the memo to troops that he would not “hesitate to act sooner or recommend a different course to the President if l feel the need to do so.”

NEW YORK — All New York City public school teachers and other staffers will have to get vaccinated against the coronavirus.

Officials announced the new policy Monday as the nation’s largest school system prepares for classes to start next month.

The city previously said teachers, like other city employees, would have to get the shots or get tested weekly for the virus. The new policy marks the first flat-out vaccination mandate for city workers in the nation’s most populous city.

SKOPJE, North Macedonia — North Macedonia’s prime minister is urging people who have not been immunized against COVID-19 to ignore anti-vaccine movements, as an infection surge has forced authorities to reopen field hospitals.

Zoran Zaev told a press conference Monday that a new awareness campaign would focus on refuting fake news on the pandemic.

Authorities say more than a third of the country’s 2 million people have been fully vaccinated.

That prompted small protests in the capital, Skopje, and other cities — where many hospitals have filled up with COVID-19 patients, leading to the reopening of emergency field hospitals.

In total, North Macedonia has recorded over 168,000 infections and nearly 5,700 deaths.

Health Minister Hala Zayed told a news conference in Cairo that the first case of delta variant was for a 35-year-old Egyptian woman that showed “very mild” symptoms and did not require hospitalization.

Zayed said authorities have recently detected others cases of the contagious delta variant but none required hospitalization.

Egypt has recorded more than 286,350 cases so far in the pandemic, including 16,671 deaths. The actual figures are believed to be much higher, given limited testing.

COPENHAGEN, Denmark — Danish Prime Minister Mette Frederiksen said “everything points at no new nationwide shutdown will be necessary” because of the high number of people vaccinated in Denmark.

“We stand in a good spot,” Frederiksen said, adding that the nearly 70% of Denmark’s population of nearly 6 million have been vaccinated. Getting the shot in Denmark is voluntary and is available to people aged 12 years and older free of charge.

Frederiksen called the vaccine “the super weapon above them all” and urged all non-vaccinated people to get the shots, chiefly by Pfizer and Moderna.

“We are now heading toward an epidemic among those who have not been vaccinated,” said Health Minister Magnus Heunicke.

According to official figures, 80% of those hospitalized are have not been vaccinated.

Heunicke said that the plan is for all Danes to receive a third vaccine injection. However, it was not decided when the booster shot would be given.

Police and army troops have mobilized to enforce the lockdown and deliver food and supplies to households. People in “high risk” districts must stay home under the stricter measures, imposed for at least two weeks.

The Health Ministry on Sunday reported 737 virus-related deaths, its highest single-day total. That raises the death toll since the pandemic began to 8,277. Hanoi is also under lockdown.

The U.S. has been Vietnam’s largest donor of vaccines, sending 5 million doses of Moderna. Separately, Vietnam has signed commercial agreements with U.S. vaccine makers Moderna and Pfizer to secure at least 80 million doses.

Last year Vietnam was praised for keeping the virus in check, an accomplishment generally attributed to the discipline of being a single-party communist state with tight controls at all levels.

But with the spread of the delta variant of the virus, the country is experiencing its worst outbreak by far, with more than half of the country’s 98 million population under lockdown orders.

COLOMBO, Sri Lanka — India has sent 140 tons of liquid medical oxygen to neighboring Sri Lanka, where the need has been rising with the fast-spreading delta variant of COVID-19.

Sri Lanka has decided to import and store 480,000 liters of oxygen to treat patients. Health officials have said production within the country is sufficient to treat patients, but the government’s decision is aimed at maintaining an adequate stock.

Sri Lanka is witnessing an unprecedented surge of COVID-19 cases and deaths, and the government imposed a 10-day lockdown until Aug. 30 in a bid to contain the virus. Doctors and trade unions have warned that hospitals and morgues are reaching maximum capacities. The country has 385,696 confirmed cases and 7,183 deaths.

AUCKLAND, New Zealand — New Zealand’s government on Monday said it is extending a strict nationwide lockdown until at least Friday as it tries to extinguish a growing coronavirus outbreak.

Prime Minister Jacinda Ardern said the lockdown would continue until at least the end of the month in Auckland, where most of the cases have been found.

“We do need more information, we need more certainty, we don’t want to take any risks with delta. If the world has taught us anything, it is to be cautious with this variant of COVID-19,” she told reporters.

The outbreak, first discovered last week, has grown to 107 cases.

But health authorities say they’ve found links between most of them, giving them hope they can contain the outbreak.

They said they’ve tested about 3% of the nation’s population over the past week.

Australia has successfully stamped out COVD-19 clusters throughout the pandemic, but an outbreak of the delta variant that was introduced by a U.S. cargo flight air crew to Sydney in June has proved more stubborn.

Western Australia, South Australia, Tasmania and the Northern Territory reported no community infections and none is locked down.

Western Australia Premier Mark McGowan has said his government won’t honor an agreement reached by Australian government leaders in July that would end lockdowns and state border closures once 80% of the population is vaccinated if that meant his state would no longer be free of the virus.

He declined to say whether he would withdraw financial support for businesses and households in states that continued to lock down after the 80% threshold is reached.

By Sunday, 30% of Australians aged 16 and over were fully vaccinated.

The vaccine, made by Medigen Vaccine Biologics Corp., was given emergency approval by regulators in July using a shortcut that prompted fierce opposition from parts of Taiwan’s medical and scientific community.

Taiwanese regulators bypassed the large-scale, longer term studies that are typically used to approve vaccines. Instead, they compared the level of antibodies that Medigen’s vaccine was able to generate with that of AstraZeneca’s vaccine, which has been approved by many governments and has undergone the full three stages of clinical trials.

The two-dose Medigen protein subunit vaccine uses a piece of the coronavirus to teach the body to mount an immune response.

The decision to give approval based on the new standard prompted an expert from the advisory committee on vaccines to resign.

Critics say granting approval before finishing full clinical trials does not provide adequate information on how effective the vaccine is in the real world in protecting from COVID-19, although initial studies may have promising results.

Party season calorie bombs (the foods you do want to avoid)

Dietitian reveals the best healthy frozen meals to buy in the supermarket, starting at...