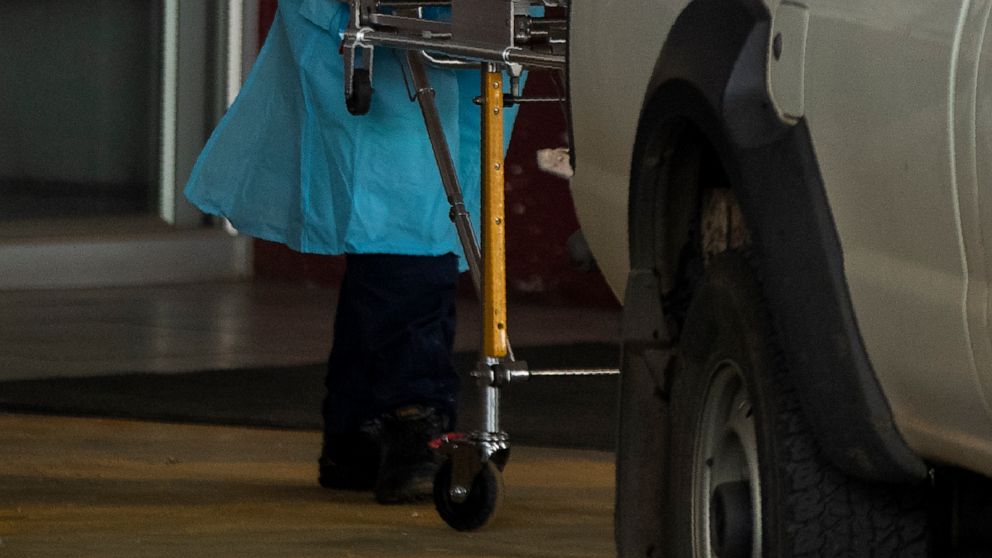 JOHANNESBURG — South Africa is struggling to cope with a spike in COVID-19 cases that has already overwhelmed many hospitals, as people returning from widespread holiday travel have spread the country’s more infectious coronavirus variant.

Of particular concern is Gauteng province, the country’s most populous, which includes the cities of Johannesburg and Pretoria. Authorities say it is already seeing a spike in new infections after people traveled to coastal areas, where the variant is dominant.

“We expect that Gauteng is going to be hit very soon and very hard,” said Professor Willem Hanekom, director of the Africa Health Research Institute. “It is anticipated Gauteng will have a steep curve of increased cases and hospitalizations.”

Already the Steve Biko Academic Hospital in the Pretoria area has reached capacity and has erected “fever tents” outside the main building to house people who are awaiting admission to the COVID-19 wards.

“In almost all cases the patients have to be treated, whether they are struggling to breathe or other symptoms. That is why you see these oxygen tanks here at the fever tents,” said Biko hospital CEO Dr. Mathabo Mathebula.

Videos circulated on social media of many patients in the tents with oxygen masks, even as the parking lot pavement was covered with rainwater.

“Over the last seven days the infections and admissions in hospitals in Gauteng have been doubling and the number of fatalities has increased quite exponentially,” Gauteng premier David Makhura said Monday.

Hospitalizations and deaths in the province are quickly surpassing the levels of the first peak experienced in July last year, he said.

An additional 1,000 beds will be added to the Nasrec field hospital near Johannesburg’s Soweto township to cope with the rising number of patients, he said.

“We are still three to four weeks away before we reach a peak but many facilities are already operating at 100% capacity,” said Professor Shabir Madhi, a specialist in vaccinology. “Many private sector hospitals are struggling to find beds and staff so it is not unique to our public sector.”

He said South Africa’s rapid increase in hospitalization is a “sign of a virus variant that is much more transmissible. Much larger numbers of people are getting infected and more people are needing hospital treatment.”

The wave of new cases is affecting all levels of society. The U.S. ambassador to South Africa, Lana Marks, announced Monday that she had COVID-19 and spent 10 days in an intensive care unit and is now recuperating at her residence. Cabinet minister Jackson Mthembu has tested positive for COVID-19 and is showing symptoms, it was announced Monday.

In response to the resurgence, South Africa has reimposed restrictions to curb the spread of the virus, including banning alcohol sales, closing bars, enforcing a night curfew and limiting attendance at public gatherings including church services and funerals.

South Africa’s military is helping to enforce the curfew.

President Cyril Ramaphosa, who has met with his National Coronavirus Command Council and Cabinet over the renewed public health crisis, has announced he will address the nation Monday night on the pandemic.

South Africa, with a population of 60 million, has reported 1.2 million confirmed cases of COVID-19, representing more than 30% of all the cases in Africa, which this week exceeded 3 million. It has reported over 33,000 virus-related deaths but experts say all numbers worldwide understate the true toll of the pandemic due to missed cases and limited testing.

Neighboring Zimbabwe is also experiencing a resurgence of COVID-19 infections, largely as a result of the high numbers of travelers between the two countries.

Zimbabwean authorities have banned families from transporting dead relatives between cities, part of new measures to stop traditional funeral rites that are believed to be increasing the spread of the disease.

The announcement stops families from taking the dead to their areas of birth for ceremonies and burial. Police have also banned public viewing of bodies and the tradition of having a corpse stay overnight in the family’s home before burial.

Is 1200 calories a day really the magic number for weight loss? Not necessarily…

Trailer released for Prince Harry and Oprah Winfrey’s mental health docuseries, The Me You...