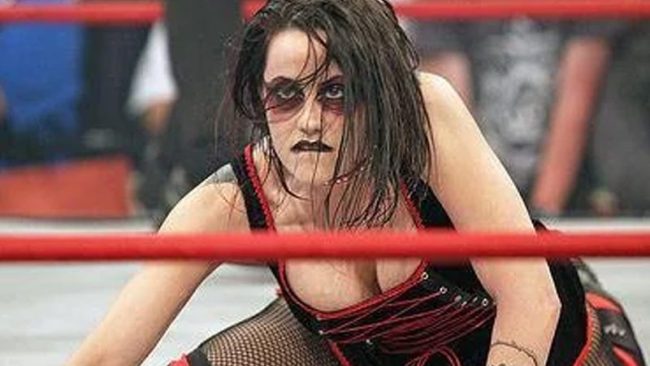 Former professional wrestler Daffney Unger, also known as the Scream Queen, is dead at the age of 46.

“We are very sad to have to announce the passing of Shannon Spruill aka Daffney Unger,” her longtime friend Lexie Fyfe said in a statement.

“We are posting this at the request of her family. Please respect their privacy at this trying time.

“I will miss you my logical sister from another mister.”

TMZ reports the Gwinnett County Medical Examiner’s Office in Georgia has confirmed Unger’s death, but has not confirmed the cause.

The video prompted immediate concern from her friends and others in the wrestling world.

“If anyone has a way of reaching Daffney Unger, or knows her address, please help out,” fellow wrestler Mick Foley tweeted.

“She’s in a bad personal place and is threatening to harm herself. My phone call went straight to voicemail.”

Others, such as wrestler Velvet Sky, posted messages of encouragement.

“All my love to you. You are never ever alone. So many people love you,” said Sky.

Police in Georgia attempted to locate Unger, who had recently moved into a new apartment.

“For those concerned about Daffney, emergency services have been contacted and sent to her most recent known address,” tweeted Sean Ross Sapp, managing editor of Fightful.

“Her family have been reached, and have her current address. She’d moved in the past couple of weeks. Police have been dispatched.”

Foley and Sapp were among those mourning her death today.

“I’m so very sorry to learn of Daffney’s passing. A terrible loss for her family, friends and wrestling. She was far ahead of her time in our business,” said Foley.

Sapp called it “an incredible loss”.

“I am completely heartbroken over the loss of my dear friend. I will miss you forever, Daff,” said another of Unger’s fellow former wrestlers, Portia Perez.

“So sad to hear this horrible news about the passing of Shannon,” said retired wrestler Peter Senerchia, known as Taz.

“Daffney was such a nice person. So talented, but just really nice.”

Thousands flood into Royal Randwick SYDNEY, AUSTRALIA – OCTOBER 16: People run to reserve a table as the turnstiles open during Everest Day at...

Outfit sparks most vulgar joke in tennisGermany’s Alexander Zverev throws his racquet during his...