GPs will play a vital role in preparing their patients for this new bushfire season, experts say.

‘The bushfire season of 2019–20 saw widespread destruction of land, national parks and property and, tragically, 33 people lost their lives.

‘The smoke-related health costs of the 2019–20 bushfire season have been estimated by researchers at the University of Tasmania to be $1.95 billion.’

That is Australian Institute of Health and Welfare (AIHW) spokesperson Richard Juckes.

While much is known about the Black Summer fires, a new AIHW report has assessed its impact on the health system.

The report detailed the effect on hospital emergency department visits in New South Wales and found there was a ‘clear increase’ in presentations for respiratory problems during the bushfire season.

‘Some areas of NSW were affected more than others, with emergency department visits rising by more than 50% in the capital region, including Bateman’s Bay during times of peak bushfire activity, and 86% in the Riverina region,’ Mr Juckes said.

Associate Professor Vicki Kotsirilos, a GP and member of the RACGP Specific Interests Climate and Environmental Medicine network, told newsGP she was not surprised by the report, given bushfire smoke damages health in a number of ways.

She says the most common presentations in general practice relating to bushfire smoke in healthy people include:

‘I have also seen healthy people develop chest tightness, difficulty breathing, asthma and wheeze for the first time from exposure to the smoke,’ she said.

Associate Professor Kotsirilos explained that bushfire smoke is a mixture of different-sized particles and noxious gases.

‘The larger particles contribute to the visible haze and upper airway respiratory symptoms,’ she said.

‘These particles are inhaled and can enter deeper into the lungs and be absorbed into the blood stream, affecting other organs of the body.’

Associate Professor Kotsirilos says when these tiny particles enter the bloodstream, they can cause:

‘We now know from extensive research worldwide that increased air pollution levels in relation to bushfire smoke is associated with increased heart and lung disease, stroke and premature death – a bit like smoking,’ she said. 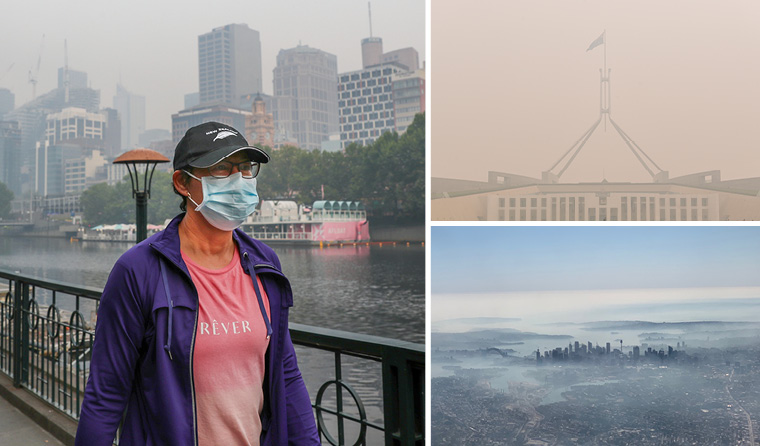 Associate Professor Kotsirilos says certain groups are at increased risk of harm from exposure to smoke, including:

People with pre-existing conditions, such as heart and lung disease, may experience ‘aggravation’ of their underlying disease.

Generally, Associate Professor Kotsirilos says, the body can manage exposure to smoke in the short term.

‘But the longer the bushfires continue, the more harmful the effects are on the body,’ she said.

Smoke inhalation can affect healthy people and those with underlying risk factors.

While there was a spike in emergency department visits during last summer’s bushfire season, the AIHW report also found sales of asthma medication were also affected.

Data from pharmacies showed ‘large increases’ in sales of inhalers for shortness of breath corresponding with the spread of bushfires throughout the season .

‘For example, in the mid-north coast, inhaler sales increased by 144% for the week beginning 10 November 2019, when several fires were burning at emergency warning level in the area,’ the report stated.

Associate Professor Kotsirilos says increased sales of asthma medication was likely due to a mix of greater need for treatment in patients with respiratory issues, and perhaps some stockpiling of medication.

‘What we need to ensure is that, as our patients enter into the high-risk bushfire season, they have an adequate supply of bronchodilators and anti-inflammatory medication like inhaled corticosteroids on hand because asthma is an airway inflammation,’ she said.

The ‘best treatment’ for patients with asthma during bushfire season is to take regular inhaled corticosteroid treatment and a bronchodilator as required, rather than just relying on a bronchodilator inhaler, according to Associate Professor Kotsirilos.

Associate Professor Kotsirilos also believes it is worth advising patients with a respiratory condition to have at least five days’ worth of medication on hand.

‘It’s also useful to ensure that they have a written [asthma] action management plan from their GP that identifies the symptoms that typically occur during bushfire seasons, how to take medication properly and when to go to hospital if medication is not helping,’ she said.

While there is a focus on keeping patients physically well during bushfire season it is important to remember the effects of such events go beyond the physiological.

‘It has a psychological impact with evidence of increased depression, anxiety and post-traumatic stress disorder,’ Associate Professor Kotsirilos said.

The AIHW report notes that the full health and related impacts of the 2019–20 bushfires ‘will not be known for some time’.

‘[H]owever, psychological health can be affected for many years,’ the report stated.

Preparing for bushfire season
As Australia enters the summer, Associate Professor Kotsirilos believes it is time for GPs to ensure patients are ready for whatever the season may bring.

‘Hopefully, with the upcoming summer season we won’t have the same problems [as last year],’ she said.

If large-scale fires do break out, Associate Professor Kotsirilos said GPs would play an important role.

The first step is to offer reassurance.

‘It’s important that we reassure our patients, ask them to stay calm and relax, knowing the bushfires will stop at some point,’ she said.

It is also important to advise people to stay indoors with windows and doors closed on days when air quality is poor,’ she said.

Patients can also be advised to avoid strenuous exercise outdoors, which causes the finer particle to ‘breathe deeper’ into the lungs.

On days with poor air quality, Associate Professor Kotsirilos recommends staying inside altogether, but suggests a well-fitted P2 mask if someone needs to venture out.

When indoors, it can helpful to use air conditioning to ‘recycle’ air in order to avoid outside air from coming indoors and avoiding evaporative coolers that draw air from outside.

Associate Professor Kotsirilos also recommends getting into the habit of checking air quality each day.

‘When the air quality outside improves, open your windows and doors to circulate fresh air indoors,’ she said.

She says this advice is relevant not only for people in close proximity to the actual fires, but also those further away.

‘Smoke and air pollution can travel long distances and what we witnessed last year is that the smoke had moved into the city and surrounding areas,’ she said.

‘We can be far from the bushfires and still have patients impacted by the bushfire smoke, so all GPs in Australia need to be aware of who are our vulnerable patients are – and to prepare them.’