A woman’s immune system is more powerful than a man’s — but that power can backfire, writes Walter and Eliza Hall Institute’s Gabrielle Belz and Cyril Seillet for The Conversation.

We know that sex hormones drive characteristic male and female traits such as breast enlargement and hip widening in women, or increased muscle mass and growth of facial hair in men. But now we also recognise they have a major impact on the immune system — our body’s inbuilt mechanism that helps fight and protect us against disease.

Research suggests this has an evolutionary basis: survival of the species may mean men are harder hit by viruses, but a woman’s reactive immune system leaves her more susceptible to autoimmune diseases and allergies.

This is because women’s immune systems mount a stronger response against foreign invaders, particularly viruses. While the male hormone testosterone tends to dampen immune responses, the female hormone oestrogen increases the number of immune cells and the intensity of their response. So women are able to recover more quickly from an infection.

All this may reflect a sneaky evolutionary trick used by viruses to enable their survival. Women have developed multiple mechanisms to transmit infections; mainly through passing bugs from mother to child during gestation or birth, or through breastfeeding. So women are better vessels for viruses.

Meanwhile, viruses have singled men out as the weaker sex. While popular culture has come up with the term “man flu”, suggesting men are over-dramatising flu symptoms, evidence suggests they may in reality be suffering more due to this dampening down of their immune responses.

However, this increased susceptibility of men to infection may not be an advantage for the long-term (over tens of thousands of years) survival of a disease-causing organism (pathogen), if it induces such severe disease that it results in the death of the host.

Pathogens modify themselves so they can be transmitted by women during pregnancy, birth or breast feeding. Because of this, many have adapted to be less aggressive in women allowing wider infection, generally across a population.

However, this feature alone is not likely to be sufficient to ensure the ongoing survival of a virus. The fitness of both sexes is necessary to reproduce long-term and thus provide new hosts for invading pathogens. Thus, the hit to the male sex must somehow be balanced by other advantages to their immune system.

Autoimmune diseases occur when the immune system turns on and attacks the body’s own cells or tissues, initiating a chronic cycle that results in damage or destruction of specific organs. These diseases include type 1 diabetes, lupus, rheumatoid arthritis, multiple sclerosis, and up to 80 different diseases that affect systems such as the intestine, bones, joints and nervous systems.

In the case of lupus, the immune system mistakenly attacks the person’s own DNA (the structure that carries a person’s genetic code) causing damage to multiple organs that will lead to weight loss, anemia and eventually heart and kidney failure. Nine out of ten patients with lupus are women and clinical observations suggest that, again, hormones are the culprits.

These differences of susceptibility between males and females tend to appear after puberty, and flare-ups increase during pregnancy. On the contrary, menopause is associated with a lower disease severity.

Studies have linked oestrogen levels with the exacerbation of lupus. Oestrogens directly act on a particular immune cell (called the plasmacytoid dendritic cell) to promote their capacity to secrete inflammatory signals, which exacerbate lupus symptoms. Although these dendritic cells are generally important for fighting viral infections, in the context of lupus and multiple sclerosis, they cause significant harm.

One in nine Australians (more than 2.5 million in total) suffer from asthma – a disease that causes swelling and narrowing of the airways. This makes it difficult to breathe when we encounter environmental allergens such as pollen.

Twice as many women develop asthma compared to men. Interestingly, males are more susceptible to asthma before to the onset of puberty but, after puberty, females are more affected and develop more severe asthma than men. Until now, the reasons for this were not obvious, but hormones were speculated to play a role.

This article was originally published on The Conversation. Read the original article. 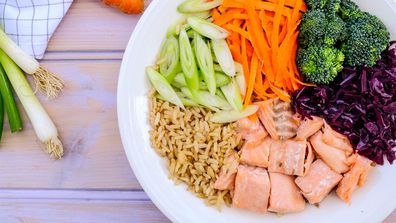 Top foods for bulking up, according to a dietitian

How to be your healthiest self ever