The “Carbis Bay Declaration” – named after the seaside town in Cornwall, southwest England, where world leaders are currently holding their summit – comprises a series of health policy commitments.

The collective steps include slashing the time taken to develop and license vaccines, treatments and diagnostics for any future disease to under 100 days, while reinforcing global surveillance networks.

It will be formally published Sunday, alongside the G7’s final communique

“The #CarbisBayDeclaration marks a proud and historic moment for us all,” Mr Johnson said on Twitter, as world leaders kicked off the second day of their three-day summit.

The #CarbisBayDeclaration marks a proud and historic moment for us all.

Under this agreement, the world’s leading democracies will commit to preventing a global pandemic from ever happening again, ensuring the devastation caused by COVID-19 is never repeated.

“Under this agreement, the world’s leading democracies will commit to preventing a global pandemic from ever happening again, ensuring the devastation caused by COVID-19 is never repeated.”

As part of the pact the G7 will boost genomic sequencing capacity, and support reforms to strengthen the World Health Organization (WHO). Meanwhile, Britain says it will establish a new centre to develop vaccines to prevent zoonotic diseases spreading from animals to humans.

On Saturday’s foreign policy agenda, this year’s coup in Myanmar and crackdown on pro-democracy supporters in Belarus are expected to figure, alongside tensions with Russia and China.

Biden is expected to press allies to bolster cooperation in dealing with Beijing in various areas, from offering an alternative to its trillion-dollar Belt and Road infrastructure initiative to confronting its alleged forced labour practices.

“This is not just about confronting or taking on China,” a senior White House official said. “This is about providing an affirmative, positive alternative vision for the world.” 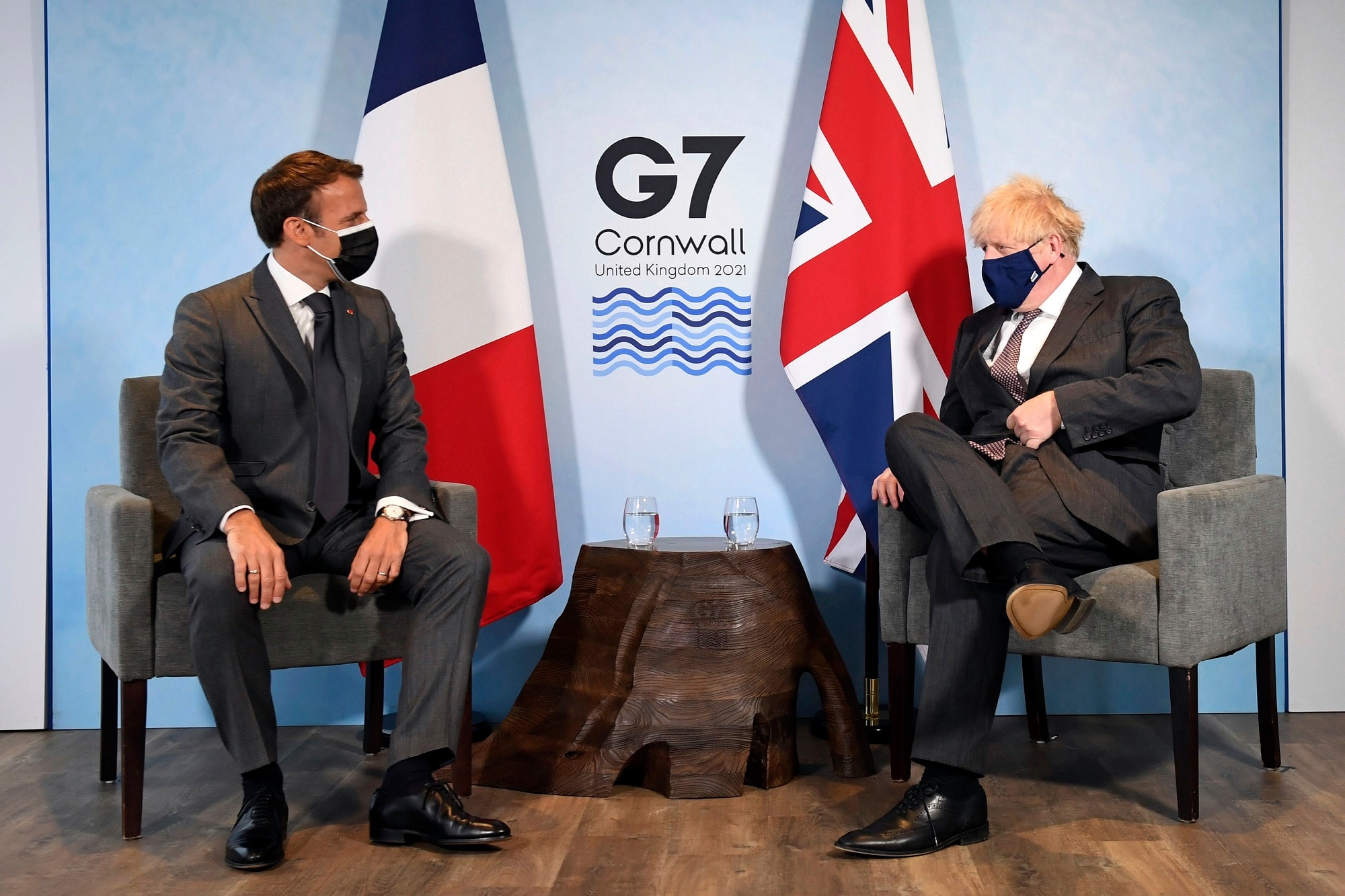 Prime Minister Boris Johnson (right) and French President Emmanuel Macron, ahead of a bilateral meeting during the G7 summit in Cornwall.

He added Biden would be urging “concrete action” on the forced labour accusations, calling them “an affront to human dignity, and an egregious example of China’s unfair economic competition”.

The US president will also seek to address frayed relations with Moscow, in particular over its cyber activity.

“There’s uniform recognition that ransomware and the abuse of virtual currencies is an urgent threat and escalating threat,” the US official said, noting the issue would feature prominently in every key meeting during Biden’s eight-day overseas tour.

Most of the leaders will reconvene Monday in Brussels for a NATO meeting, before Biden heads on to his first summit with President Vladimir Putin in Geneva, vowing to deliver a blunt message about Russian behaviour.

“I’ll tell you (about it) after I’ve delivered it,” Biden told reporters Friday.

In a rare interview with US media, Putin voiced hope Friday that Biden will be less impulsive than Trump, who faced criticism for being too soft on the Russian leader.

“It is my great hope that, yes, there are some advantages, some disadvantages, but there will not be any impulse-based movements on behalf of the sitting US president,” Putin told NBC News.

The G7 is expected to finalise the “Carbis Bay Declaration” comprising a series of commitments to prevent a repeat of the devastation wreaked by COVID-19.

“For the first time today the world’s leading democracies have come together to make sure that never again will we be caught unawares,” British Prime Minister Boris Johnson said in remarks released ahead of the summit’s second day.

“That means learning lessons from the last 18 months and doing it differently next time around.”

The declaration will be published Sunday alongside the G7’s final communique, following a beachside barbecue on Saturday night.

The collective steps include slashing the time taken to develop and license vaccines, treatments and diagnostics for any future disease to under 100 days, while reinforcing global surveillance networks.

The leaders will vow to boost genomic sequencing capacity, and support reforms to strengthen the World Health Organization, according to Johnson’s government, which like the US wants China to allow new access to WHO experts to determine how Covid-19 first emerged.

WHO chief Tedros Adhanom Ghebreyesus, criticised in some quarters for being too accommodating of China, welcomed the health pact.

And he said the UN agency would examine a British proposal to create a “Global Pandemic Radar” to send early warnings of future outbreaks.

However, Oxfam said the declaration “does nothing to address the fundamental problems that are preventing vaccines being accessible to the vast majority of humanity”.

“It’s welcome that G7 leaders are planning measures to end future pandemics faster, but the lack of urgent action to end the current crisis is unforgiveable,” its health policy manager Anna Marriott said.

High-protein breakfasts on the go