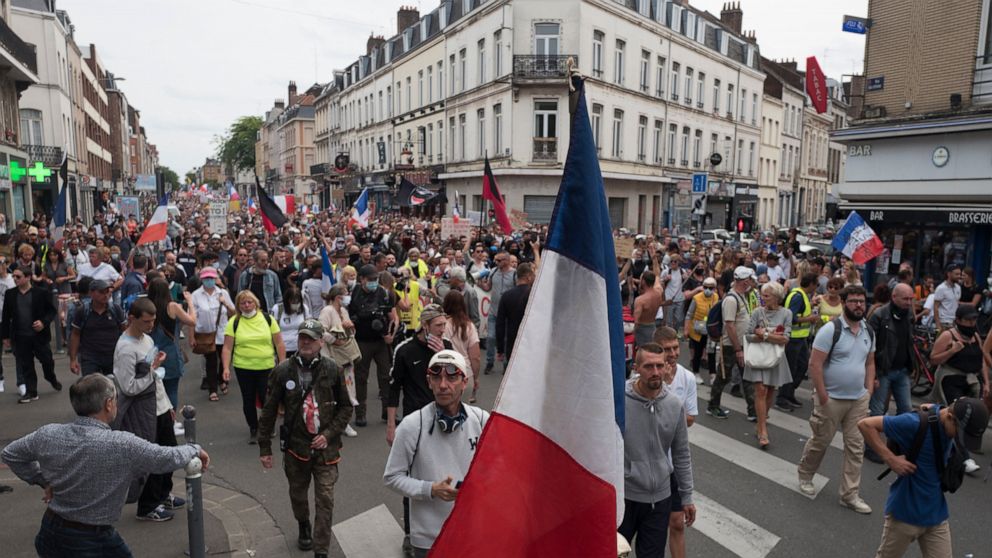 Thousands of protesters are marching in cities and towns across France against a COVID-19 health pass that is now required to enter restaurants and cafes, cultural and sports venues and long-distance travel

PARIS — Thousands marched Saturday in cities across France to protest the COVID-19 health pass that is now required to access restaurants and cafes, cultural venues, sports arenas and long-distance travel.

For a sixth straight Saturday, opponents denounced what they see as a restriction of their freedom. Many criticized the measure, claiming the French government was implicitly making vaccines obligatory.

In Paris, four demonstrations were organized by different groups and over 200 protests were taking place elsewhere in French cities and towns. Last week more than 200,000 marchers turned out.

The pass shows that people are fully vaccinated, have had a recent negative test or proof of a recent COVID-19 recovery. The law authorizing it also made vaccinations mandatory for French health workers by Sept. 15.

Despite the protests, polls have shown that the majority of French people support the health pass. Millions have received their first vaccine shot since French President Emmanuel Macron announced the measure on July 12.

Since last month, France is registering a high number of infections — about 22,000 each day, a figure that has remained stable over the past week.

Over 47 million people in France, or 70.2% of the population, have received at least one vaccine shot and more than 40.5 million, or 60.5%, are fully vaccinated.

Follow all AP stories on the global pandemic at https://apnews.com/hub/coronavirus-pandemic.

Anti-Djoker is the hero Aus Open neededJennifer Brady of the United States.