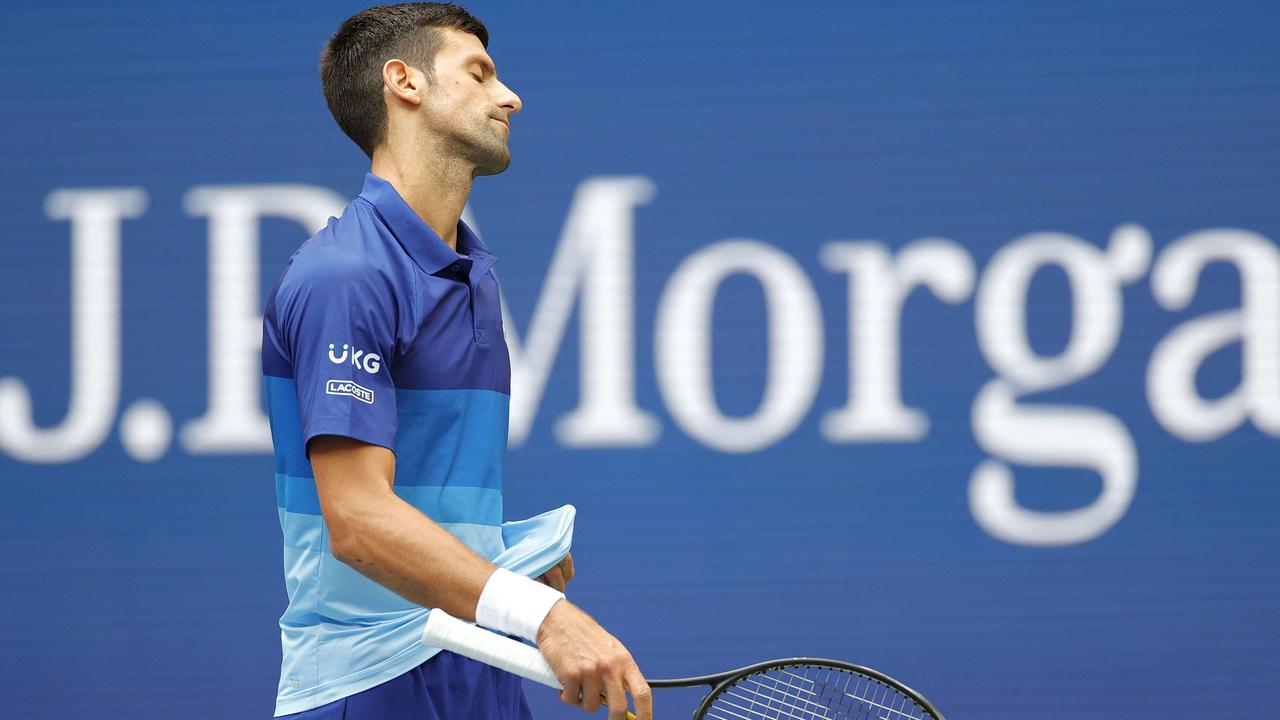 Novak Djokovic is on the verge of history as he seeks to achieve the rarest feat in tennis during today’s US Open final in New York.

Novak Djokovic is attempting to win the first calendar-year men’s singles Grand Slam since 1969 in today’s US Open final and make his case to be considered the greatest player in tennis history.

The 34-year-old Serbian world No. 1 is facing Russia’s second-ranked Daniil Medvedev at Arthur Ashe Stadium in the biggest match of a career that has brought him 20 Slam trophies.

Djokovic will try to complete the first sweep of US, Australian and French Open and Wimbledon titles in the same year since Australian legend Rod Laver managed the feat 52 years ago.

Medvedev took the ascendancy right away by breaking Djokovic in the first game of the match, then consolidated for 2-0.

Djokovic saved two break points in the next game to get on the board before Medvedev held easily to maintain his buffer and go up 3-1.

Soon it was 4-2 as Medvedev made light work of his service games. He had dropped just two points off his own racquet as he started in red-hot fashion.

Medvedev was even thumping down his second serves in an attempt to nullify Djokovic’s greatest strength — his return game. When it was the Russian’s turn to return, he was standing miles behind the baseline to give himself as much time as possible on his ground strokes.

Djokovic rarely enjoys the majority of crowd support at grand slams — he’s been booed at Wimbledon and Melbourne Park in the past — but Gilbert made the shock call he thinks the fans in New York will be cheering more loudly for the Serbian this time around because they appreciate his pursuit of history.

Medvedev famously antagonised the Flushing Meadows crowd as he embraced the role of the villain in 2019, but has won over US Open fans this time around en route to the final.

The last singles Grand Slam overall was by Steffi Graf in 1988.

Djokovic also will be chasing his fourth US Open title after 2011, 2015 and 2018. A victory would give him 21 major titles and for the first time put him atop the all-time Slams chase, moving one ahead of the record mark he shares with Roger Federer and Rafael Nadal.

“I’m sure he’s going to give it all to win his first Slam,” Djokovic said. “On the other side, I’ll be giving it all I possibly got in the tank to win this match.”

Medvedev, the 2019 US Open runner-up, lost his only other Slam final to Djokovic at the Australian Open in February.

“I always give my best, but I feel like I didn’t leave my heart on the court in Melbourne,” he said. “That’s what I’m going to try to do on Arthur Ashe. No matter the score, I’m just going to turn up the heat and try to do my best.”

Djokovic has won 27 consecutive Slam matches, three shy of his all-time record streak from 2015 and 2016, when he won all four major titles in a row.

“Probably all these big matches I won, big titles over the years, have built that aura around me that players know there’s a never-die spirit with me, especially when I play Grand Slams,” Djokovic said. “They know that until the last shot, things can turn around.”

New Zealand to start reopening borders to world from January

The Latest: Brisbane, Australia will go into lockdown