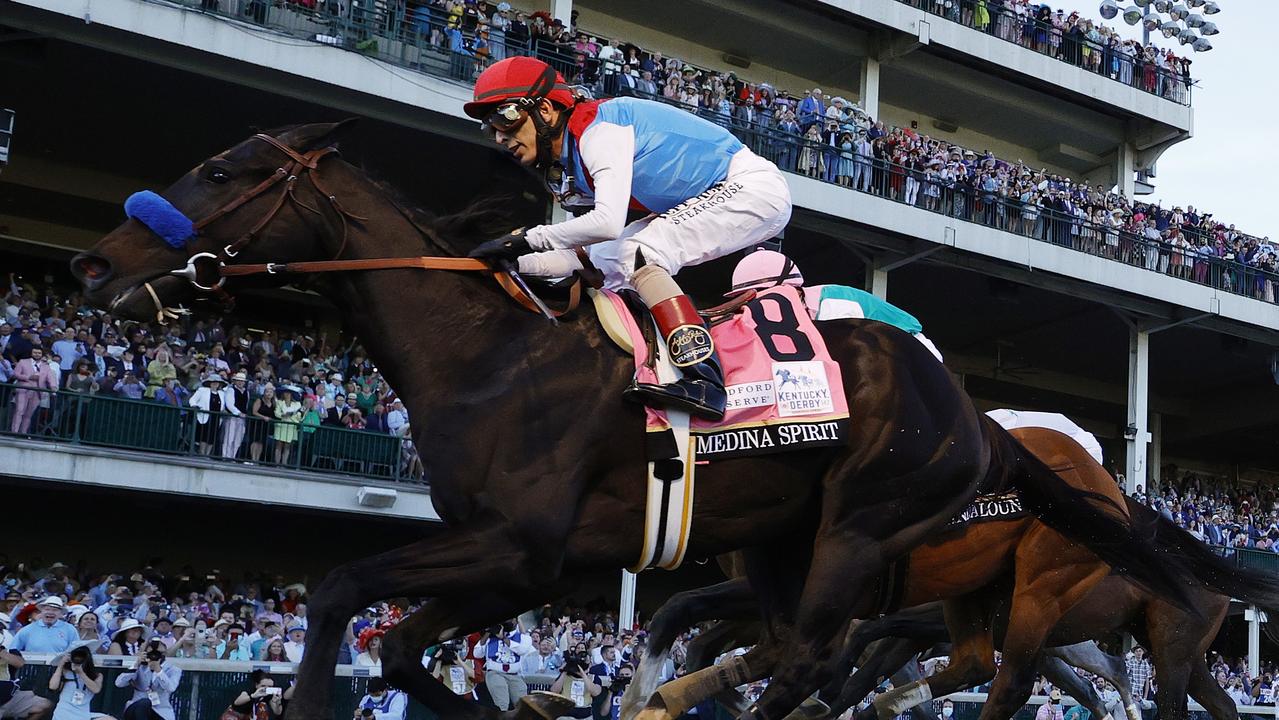 The 2021 Kentucky Derby winner has died just month after winning the famous race and a subsequent extraordinary drug scandal.

Medina Spirit, who won the 2021 Kentucky Derby but failed a drug test after the race, collapsed and died on Monday after a workout at California’s Santa Anita Park.

Bob Baffert, Medina Spirit’s trainer, said the horse died of a heart attack. Medina Spirit will now undergo a necropsy, which is a requirement of the California Horse Racing Board according to WLKY.

“My entire barn is devastated by this news,” Baffert said in a statement, via the Associated Press. “Medina Spirit was a great champion, a member of our family who was loved by all, and we are deeply mourning his loss. I will always cherish the proud and personal memories of Medina Spirit and his tremendous spirit.”

The 3-year-old colt won the first leg of the 2021 Triple Crown despite 12-to-1 odds and gave Baffert his record-breaking seventh Kentucky Derby win. But following the May 1 race, Medina Spirit tested positive for betamethasone and triggered an investigation, while leading to a two-year suspension for Baffert by Churchill Downs. Medina Spirit raced and placed third in the Preakness, but wasn’t allowed to participate in the Belmont Stakes — the Triple Crown’s final leg — because of the failed test.

On Friday, Baffert’s attorney Craig Robertson said that testing conducted in a New York lab confirmed an ointment, and not an injection, led to the positive test, but the Kentucky Horse Racing Commission still needs to determine whether that’s enough evidence to eliminate the positive test and not disqualify Medina Spirit from its Kentucky Derby win.

Betamethasone, a legal substance, isn’t allowed on race days in New York, Kentucky and Maryland, which are the three states where the Triple Crown races are conducted.

“It has now been scientifically proven that what Bob Baffert said from the beginning was true — Medina Spirit was never injected with betamethasone and the findings following the Kentucky Derby were solely the result of the horse being treated for a skin condition by way of a topical ointment — all at the direction of Medina Spirit’s veterinarian,” Robertson told the Associated Press in an email.

According to the Associated Press, Medina Spirit’s workout on Monday was its second since placing second in the Breeders’ Cup Classic on Nov. 6.

Dr. Jeff Blea, the California Horse Racing Board’s equine medical director, told the New York Times that the horse “did not feel right and his rider tried to pull him up” before Medina Spirit fell and expired. But, Blea told BloodHorse, sometimes it’s difficult to determine why the death occurred even with the necropsy program, and when dealing with sudden deaths like Medina Spirit’s, the causes can become even more difficult to pinpoint.

“It was quick and he didn’t suffer,” Amr Zedan, Medina Spirit’s owner, told the Thoroughbred Daily News. “It’s unfortunate. In a moment like this there is not much that we can do. All I can say is that he gave us the ride of our lives and brought everyone together.”

After finishing third at the Preakness, Medina Spirit picked up victories at the Shared Belief Stakes and the Awesome Again Stakes.

This story first appeared in the New York Post and was republished with permission.

How to build immunity for winter now