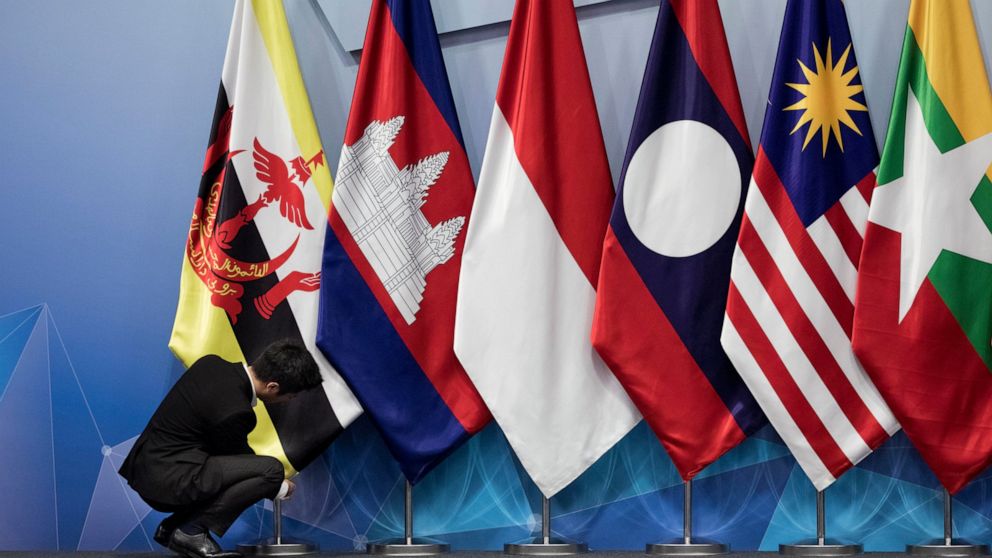 BEIJING — China is hosting foreign ministers from 10 Southeast Asian nations this week amid heightened competition between Beijing and Washington for influence in the region.

Chinese state media said the meeting Tuesday in the southwestern megacity of Chongqing will cover issues from restoring tourism and other economic exchanges battered by COVID-19, to more coordinated efforts in fighting the pandemic and the feasibility of creating a “vaccine passport” to allow freer travel among them.

Chinese Foreign Minister Wang Yi is also expected to meet separately with each of his counterparts on the sidelines of the conference.

Beijing has been building influence with the 10 countries that make up the Association of Southeast Asian Nations, despite frictions with some of them over competing territorial claims in the South China Sea. The Philippines has complained repeatedly over the presence of Chinese boats moored at a reef that it claims and Malaysia last week protested over an alleged intrusion by 16 Chinese military aircraft into its airspace, calling the incident a “serious threat to national sovereignty and flight safety.”

China’s economic and diplomatic heft has helped override such concerns, however, while the bloc has been unable to form a unified stand in the face of opposition from Chinese allies within it, primarily Cambodia.

“Over the past three decades, China-ASEAN cooperation has grown in leaps and bounds, becoming the most successful and dynamic example of cooperation in the Asia-Pacific region,” Chinese Foreign Ministry spokesperson Wang Wenbin said Sunday in announcing the meeting.

“The fact that the two sides agreed to hold a face-to-face special foreign ministers’ meeting despite the ongoing grim COVID-19 situation reflects how countries attach great importance to and hold high expectations of China-ASEAN relations under the new circumstances,” Wang said.

The U.S., which maintains an active naval presence in the South China Sea and strong relations with the region, has expressed concerns over China’s growing presence, particularly its impact on security and Beijing’s political influence over fragile democracies.

In a meeting with Cambodian Prime Minister Hun Sen last Tuesday, U.S. Deputy Secretary of State Wendy Sherman focused on China’s construction of new facilities at Ream Naval Base and urged Cambodia’s leadership to maintain an independent and balanced foreign policy, “in the best interests of the Cambodian people.”

It wasn’t clear whether the issue of Myanmar, an ASEAN member where the military seized power in a coup on Feb. 1, would come up at the meeting with ASEAN foreign ministers.

’’We support ASEAN in upholding the principle of non-interference in internal affairs and the tradition of consensus,” Wang said at a briefing on Monday. “We support ASEAN, as a mature regional organization, in encouraging and constructively participating in Myanmar’s domestic reconciliation process in the ASEAN way, and working out effective approaches to alleviate the situation and solve the problem within the ASEAN framework.”

“China will continue to maintain close communication with ASEAN, support ASEAN’s mediation efforts, and work with all parties in Myanmar in its own way to promote an early soft landing of the situation in Myanmar,” Wang said. “Regarding the discussion over the Myanmar issue during this ASEAN foreign ministerial meeting, please stay tuned.”

Myanmar security forces have brutally suppressed widespread popular protests against the military takeover, firing live ammunition into crowds and carrying out waves of arrests. As of Friday, 845 people have been killed in the crackdown, according to the independent Assistance Association of Political Prisoners.

China calls the U.S. naval presence in Southeast Asia the biggest threat to security in the region, particularly its insistence on sailing close to Chinese-held territories in what is termed freedom of navigation operations.

Beijing also strongly objects to strengthened relations between the U.S. and Taiwan, the self-governing island claimed by China, which threatens to use military force to bring it under its control.

Washington sent a strong message of support for Taiwan on Sunday when three U.S. senators flew to Taipei on an Air Force transport plane to announce the U.S. will give Taiwan 750,000 doses of COVID-19 vaccine after the island complained that China is hindering its efforts to secure vaccines as it battles an outbreak.

Democratic Sen. Tammy Duckworth of Illinois, who made a three-hour stop in Taiwan with fellow Democrat Christopher Coons of Delaware and Republican Dan Sullivan of Alaska, said their visit underscores bipartisan U.S. backing for the democratic island.

China “firmly rejects” the senators’ visit and has made “solemn complaints with the U.S.,” Wang said at Monday’s briefing.

“We urge the U.S. side to … immediately cease any forms of official contacts with Taiwan, handle the Taiwan issue with caution, and refrain from sending any wrong signals to the separatist forces of Taiwan independence so as to avoid causing further serious damage to China-U.S. relations and peace and stability in the Taiwan Strait,” Wang said.

The Latest: Germany quarantines all in 2 high-rise buildings

Why the Olympics will be truly bizarreTokyo Governor Yuriko Koike stands next to the...