Burning more calories than you consume is the only sure-fire way to lose weight, and one US man took this idea to the extreme by only eating junk food for 30 days — provided it was under his daily caloric limit.

Writer Jeff Wilser challenged himself to eat nothing but junk to examine if it’s possible to eat sugary, processed foods and still look and feel great.

His daily meals generally capped out at around 2000 calories (or about 8400kJ, 300kJ below the Australian daily recommended intake), and included meals consisting wholly of donuts, chips or lollies.

After 30 days of calorie-tracking snacking, he lost five kilos, his cholesterol went down and his body fat dipped by about two percentage points. He even ended up writing a book on health trends, based on his experience.

He remarked that after his 30-day challenge, he found moderation is the key to weight loss.

“The point isn’t that junk food is good. It’s not. The point is that moderation is such a powerful force that it works even when you’re eating crap,” writes Wilser in an excerpt posted to Bon Appetit.

Think twice before going on an all-junk diet

But just like going on a juice cleanse to lose weight, just because you can do something doesn’t mean you should.

Kate Gudorf, accredited practising dietitian and spokesperson for the Dietititans Association of Australia (DAA), told 9Honey Coach what happens inside your body when you eat low-nutritional value foods like sweets.

“Firstly this is a really good example that a weight-loss diet and a healthy diet is not necessarily the same,” says Gudorf.

“When you’re consuming discretionary foods — that’s foods outside the key recommendations in the Australian Dietary Guidelines — you’re putting yourself at risk of developing chronic diseases like diabetes, cardiovascular disease and even some cancers.”

Heavy consumption of junk food puts you at risk

The links between foods high in added sugars and chronic disease are well documented.

A 2014 study that examined the diets of US adults found a significant relationship between added sugar consumption and increased risk of dying from cardiovascular disease.

Even more recently, researchers here in Australia examined the relationship between junk food intake and the size of our brains.

They found that those who ate more unhealthy foods like sweet drinks, salty snacks and processed meats had a smaller brain, potentially increasing their risk of developing mental health disorders.

Gudorf believes that while it’s important to know how much energy you are consuming, you can’t forget the big picture of nutrition, which encompasses more than the weight on the scale.

“A healthy diet that includes fruits, vegetables, lean meats, some whole grains and dairy isn’t sexy — but it’s based on heaps of evidence and is aimed to prevent chronic disease,” says Gudorf. 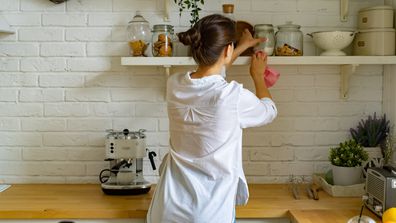 Building Big Back: The Pendlay Row

The Barbell Squat and Deadlift Alternative