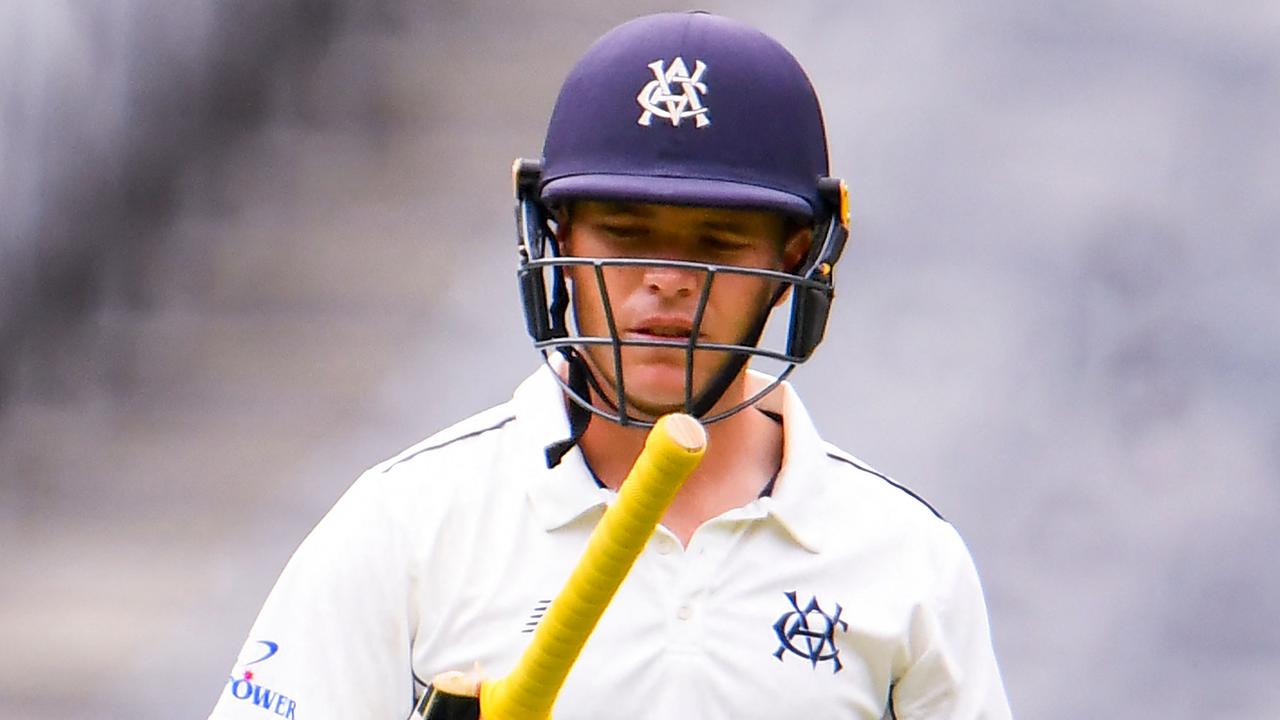 Cricket returned to the MCG on Friday but it wasn’t a happy hunting ground for hometown hero and Ashes hopeful Marcus Harris.

Marcus Harris is confident Test selection will be based on a “body of work” and not individual scores, and the Victorian opener has a few runs in the bank to lean on as Ashes selection D-Day draws closer.

But he didn’t add to his recent big haul as cricket returned to the MCG, with the Test-aspirant removed for just one as NSW put Victoria into bat in bowler-friendly conditions in their second-straight Sheffield Shield showdown.

Harris, who was out edging Liam Hatcher to slip in the sixth over, is a certainty to be part of an extended Test squad that will assemble towards the middle of November to begin preparations for the Ashes.

But while the left-hander has been nominated by plenty as the likely opening partner for David Warner in the Ashes opener at the Gabba on December 8, a field narrowed after Harris’ Victorian teammate Will Pucovski was effectively ruled out because of lingering concussion symptoms, a push for veteran Usman Khawaja is gaining some momentum.

Harris was coming off a second-innings century against NSW made in tough conditions at Drummoyne Oval last week and made four hundreds in English county cricket during the Australian winter.

“I had a really good conversation with George Bailey probably a week ago,” Harris said this week.

“I sort of know where I stand and what needs to happen and what I need to do.

“I think (selection is) probably going to be more (based) on a body of work rather than a couple of Shield games at the start of the season.”

The Vics also lost captain Peter Handscomb, another coming off a last-start hundred against the Blues, just before lunch, going into the break at 2-69, with Test spinner Nathan Lyon bowling seven overs, for no wickets, in the opening session of the game.

Before the match NSW keeper Peter Nevill said it was hard to see a weakness in Harris’ game during his 361-ball innings last week, and he was the frontrunner to partner Warner in the opening Test.

“He‘s obviously had a very good off-season in England as well. He’s been churning out the runs for a long period of time,” Nevill said.

“If they need an opener to partner with David Warner for the first Test, I’m sure he’s well and truly in the frame.

“He seems to be the front runner for mine.”

Healthcare workers caught COVID-19 in Victoria in their thousands, so what went wrong? –...

Why ‘feed a cold, starve a fever’ is actually terrible advice

Best cross training shoes: Most versatile sneakers for the gym, running and more

Stop sitting still and do these 8 activities throughout the workday — 3 minutes...