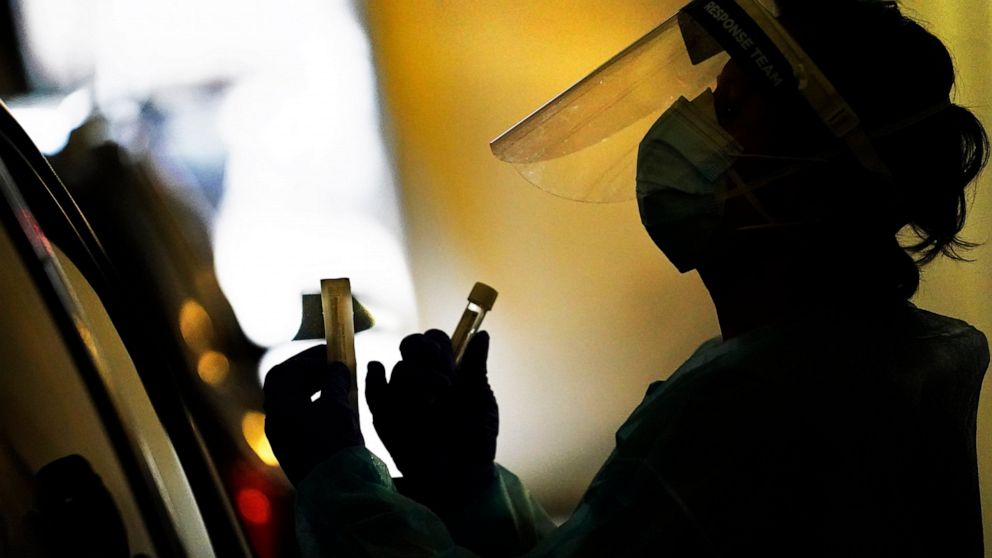 SIOUX FALLS, S.D. — Deaths from the coronavirus pandemic are spiking across the country, yet a new poll finds little increase in alarm among Americans about COVID-19 infections and no significant change in opinion about how the government should act to slow the spread.

The survey from The Associated Press-NORC Center for Public Affairs Research finds about 4 in 10 Americans say they are extremely or very worried about themselves or a family member being infected with the virus, about the same as in October and slightly lower than in surveys conducted in March and in July. Stable majorities continue to favor requirements that people wear masks and limit the size of gatherings.

The risks of infection are greater than ever across broad swaths of the country — more than 1 million people tested positive for the coronavirus over five days last week. The surge has led to record numbers of daily virus deaths as the U.S. nears 300,000 people dying from the virus over the course of the pandemic.

The nation’s top health officials have pleaded with Americans to redouble their efforts to prevent infections, especially during the holidays. Roughly three-quarters of Americans say they’re at least somewhat worried about the virus, a figure that’s about the same as in October. In March and then again in July, about half of Americans were highly worried.

“We know our risks. We see what’s happening. We see people dying,” said Sarah Totta, a 36-year-old from Kansas City, Missouri. “But to be honest, I think we knew this was coming in the winter, and I just think you have to manage the risks.”

Support for stay-at-home orders peaked in April, with about 8 in 10 in favor, and has steadily dipped since. Fifty percent now support requiring Americans to stay home except for essential errands, up somewhat from 44% in October. Now 45% favor closing bars and restaurants, just slightly higher than 41% two months ago. About a third of Americans oppose both steps.

Totta, a Republican, viewed forced closures as a last resort to be taken only when hospitals become overburdened. She said she would prefer that governments take an “empowering rather than controlling” approach but acknowledged her area could have benefited from a lockdown in the fall as the Midwest saw case counts rise.

The survey’s findings highlight the stark differences between how Republicans and Democrats view the pandemic. Concern about the virus and support for restrictions remain overwhelming among Democrats. About 9 in 10 are at least somewhat worried about infections, compared with about 6 in 10 Republicans.

As California Gov. Gavin Newsom, a Democrat, this month took his most aggressive actions since the spring to try to prevent hospitals from being overwhelmed with patients, 26-year-old Lisa Main, who works in sales at a hotel, worried what effect it would have on the economy.

“In complete honesty, I think this pandemic is kind of blown out of proportion,” said Main, who is a Republican. “I went to a wedding, and no one’s gotten sick from that.”

Meanwhile, Republican South Dakota Gov. Kristi Noem has derided mask mandates, even as her state suffers through the nation’s highest rate of deaths per capita in recent weeks. To defend her approach, Noem has pointed out that the virus is running rampant even in states where Democratic governors such as Newsom have issued strict orders.

“I hate that the coronavirus has turned political, but it has,” Totta said.

In Florida, where Republican Gov. Ron DeSantis has stridently opposed ordering bars and restaurants to close, 26-year-old Lewis Venegas, an independent, felt frustrated at seeing cases increase, fearing his mother and stepmother are vulnerable. He said it’s impossible to stay socially distanced from people at the Walmart store in Miami where he works, though most people wear masks.

The fears of the pandemic have at times become overwhelming, he said: “I got to the point where I was so scared that I just started crying uncontrollably.”

Support for requirements that would limit interactions still has broad support from Americans overall. Roughly two-thirds favor restricting gatherings to 10 people or fewer. And three-quarters favor requiring people to wear masks when around others outside their homes.

About 9 in 10 Democrats support a mask mandate and a limit on the size of gatherings. About three-quarters support stay-home orders, up somewhat from about 6 in 10 in October. And 66% think bars and restaurants should be closed, an uptick from 56% two months ago.

In some pockets of the West and Midwest, where a fall wave of cases has been particularly devastating, arguments over mask mandates have turned ugly. Local officials have faced threats and protests as they grappled with ways to slow infections.

“I just don’t like being told what to do,” said Fred Carrigan, a 58-year-old from Portland, Indiana, who expressed a deep distrust of any government action.

That kind of skepticism could hinder health officials who are now working to convince millions of Americans that forthcoming vaccines are safe and effective. Experts estimate at least 70% of the U.S. population needs to be vaccinated to hold the virus in check, but the survey found that only about half of Americans are ready to get the shots when they become available.

But for Jill VonOhlen, 72, the vaccine presented some light at the end of a long, and at times dark, year.

“I’m absolutely amazed that we have a vaccine. The fact that we have that really does give me hope,” she said. “I’ll be first in line, no doubt. I’ll just have to hear that (Dr. Anthony) Fauci or someone says it’s OK.’”

The AP-NORC poll of 1,117 adults was conducted Dec. 3-7 using a sample drawn from NORC’s probability-based AmeriSpeak Panel, which is designed to be representative of the U.S. population. The margin of sampling error for all respondents is plus or minus 3.9 percentage points.