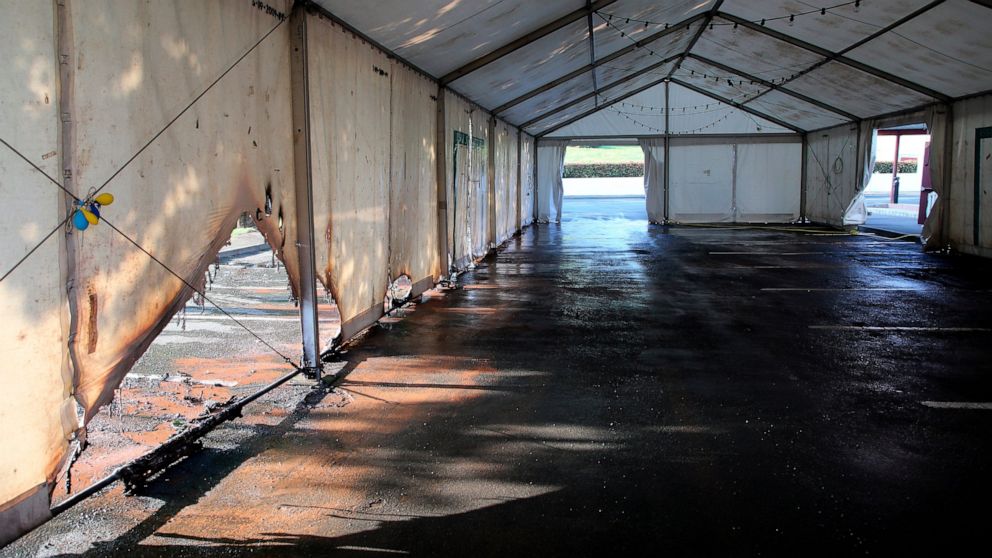 PARIS — A French Holocaust survivor has denounced anti-vaccination protesters comparing themselves to Jews who were persecuted by Nazi Germany during World War II. French officials and anti-racism groups joined the 94-year-old in expressing indignation.

As more than 100,000 people marched around France against government vaccine rules on Saturday, some demonstrators wore yellow stars recalling the ones the Nazis forced Jews to wear. Other demonstrators carried signs evoking the Auschwitz death camp or South Africa’s apartheid regime, claiming the French government was unfairly mistreating them with its anti-pandemic measures.

“You can’t imagine how much that upset me. This comparison is hateful. We must all rise up against this ignominy,” Holocaust survivor Joseph Szwarc said Sunday during a ceremony commemorating victims of antisemitic and racist acts by the French state, which collaborated with Adolf Hitler’s regime.

“I wore the star, I know what that is, I still have it in my flesh,” Szwarc, who was deported from France by the Nazis, said with tears in his eyes. “It is everyone’s duty to not allow this outrageous, antisemitic, racist wave to pass over us.”

Historian and former Nazi hunter Serge Klarsfeld also took aim at the analogy, stressing Monday that “the yellow star was a symbol of death that excluded Jews from society and marked them for extermination, while vaccines, on the other hand, save lives.” To equate the two, he told The Associated Press, is an “odious” comparison that serves to trivialize the yellow star.

French government spokesman Gabriel Attal lamented the “absolutely abject comparisons” of vaccine rules to Nazi atrocities, and he urged other political leaders to speak out.

The International League against Racism and Anti-Semitism said the protesters were “mocking victims of the Holocaust” and minimizing crimes against humanity committed during World War II.

Some commentators said political forces that are jockeying ahead of next year’s French presidential election manipulated the protesters.

Saturday’s protests drew a mix of people angry at the government for various reasons, and notably, supporters of the far right. Prominent French far-right figures have been convicted in the past of antisemitism, racism and denying the Holocaust.

The government is introducing a bill Monday requiring a ll health care workers to get vaccinated against the coronavirus and requiring COVID passes to enter restaurants and other venues.

At a large protest in Paris on Saturday against vaccine rules, one demonstrator pasted a star on his back reading “not vaccinated.” Another, Bruno Auquier, a 53-year-old town councilor who lives on the outskirts of Paris, drew a yellow star on his T-shirt and handed out arm bands with the star.

“I will never get vaccinated,” Auquier said. “People need to wake up,” he said, questioning the safety of COVID-19 vaccines.

Auquier expressed concern that the new measures would restrict his two children’s freedom and pledged to take them out of school if vaccination becomes mandatory.

Polls suggest most French people support the measures, but they have prompted anger in some quarters. Vandals targeted two vaccination centers in southwest France over the weekend. One was set on fire, and another covered in graffiti, including a reference to the Nazi occupation of France.

France has reported more than 111,000 deaths in the pandemic, and new confirmed cases are increasing again, raising worries about renewed pressure on hospitals and further restrictions that would damage jobs and businesses.

The government ordered tougher border controls on visitors, and some regions have reinstated mask rules outdoors and ordered restaurants and bars to close early. Government spokesman Attal raised the possibility Monday of shutting down night clubs again, just days after they reopened.

Klarsfeld, whose father died in Auschwitz, pushed back against protesters’ demands for “liberty” and claims that the latest health measures were dictatorial, saying that dictatorships adopt repressive measures to serve their own ends, while republics sometimes adopt necessary measures for everyone’s good.

“What freedom is it they seek? The freedom to be contagious?” he asked, noting that vaccines save many lives.

The Latest: Virus infections are rising sharply in Moscow